Devo Invite Sheen To Join Them On Tour 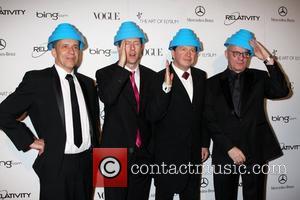 Whip It rockers Devo have invited out-of-work TV star Charlie Sheen to join them as their touring frontman.
Founding member Gerald Casale admits he has been fascinated by Sheen's media blitz and he'd love to hit the road with the actor once he returns from Haiti, where he's planning to help pal Sean Penn's earthquake relief effort.
Casale reveals he has been watching Sheen's rants and raves on TV and on the Internet - and he thinks the time is right for him to become a rock star.
He tells SanDiego.com, "It's reached the level of art. I mean wow. I like the way he called Thomas Jefferson a p***y on that radio interview, and then he put down the 12-Step guy as an addled brain idiot weakling, because he knows how to use his mind to instantly cure himself, and all these weak people don't understand it. It's fantastic... This guy is kind of like a coked-up Yoda.
"This guy's brilliant, he's a philosopher of our devolved culture. He impresses me with the s**t he says. It's unbelievable."
And, speaking of his tour plans with Sheen, Casale adds, "(He could sing) any of our songs that he wanted to sing... Since (bandmate) Mark (Mothersbaugh) doesn't want to tour, I need to ask Charlie Sheen if he'll be our lead singer! I mean that would be Devo and it would be tremendous! Can't you see him singing and taking a drag of a cigarette in between?
"That'd be great. We'll give him a real whip and let his goddesses (girlfriends) up onstage, oh man."