An interview with Desperate Journalist

CM: What would a typical example of a song like that be?
JB: The Smiths' songs are an obvious example. (Caz whispers, 'The Cure' into Jo's ear) Not The Cure. I really like them, but I don't think lyrically that's what I'm working towards.

CM: Surely you're trying to play that Cure sh*t down a bit too?
Simon Drowner (SD): Three of us are. JB: It is useful to me and it is cathartic doing it live. It makes me feel like all the stupid anxieties and horrible miseries I've put myself through or been put through are all being used for something vaguely useful. I hope people can empathise with it.

CM: Do you think your brutal honesty is important?
JB: The way I write songs, I can't lie or make stuff up, because I wouldn't feel right singing it. I've been in bands where I've sung other people's words and it felt really horrible, like I was telling a massive lie to everyone. If I'm singing something then I have to be 100% behind it.
Caz Hellbent (CH): I don't feel like I'm in Jo's inner world because I feel like I own the songs too. I think of myself when I listen to the words and the way Jo sings - same as when I listen to bands I like.
RH (Rob Hardy): For me, it doesn't feel like Jo's just doing some individual totemic lyric that latches itself on to the music. It's more that this is the stuff that we've collectively created and that's our universe.
JB: When you listen to Joy Division, you don't feel like you're in Ian Curtis' world, you feel like you're in Joy Division's world. Not that I'm like Ian Curtis (laughs nervously).

CM: Rob - would you write something in mind with Jo singing on it?
RH: Jo will write the initial melody. After that, I know Jo so well now that I don't really think about songwriting because it feels natural.

CM: Has that happened over time?
RH: A surprisingly short amount of time, actually. The first EP wasn't quite a struggle, but very much a matter of trying things out. Very quickly after that, we felt we knew what worked.

CM: Looking at recent times, you have to call it a success story. One of my favourite creative forces, Philip Larkin, feared being happy because he thought he'd have nothing to write about. How do you feel about the prospect of success?
JB: I think it's brilliant. Anybody who says that success is the death-knell of a band is completely wrong. As an 'artist', if I may use that word in a really pretentious way, you want the things you do to reach the widest number of people possible. If that happens, it can only be a good thing, particularly if you're a small indie band. It's never going to get to a 'U2' level, so you don't have to worry about being f**king Bono.
RH: For me success matters less than the process by which we got there. It's not like anyone interfered or told us what to do. We haven't had any press campaigns, it's all been on our own terms and so any success has been because we've been plugging away just doing what we do.
SD: I enjoy it more, things like tonight being sold out, because it has taken us a few years to get to this point.

CM: I have to mention the band name at some point (Simon gives me a sideways glance). Was there any sense of a pre-emptive strike in choosing it? Is it pure homage to that band Caz mentioned before? An anti-pretentiousness reference?
SD: It wasn't pure homage, I can definitely say that. JB: There were many different band names circulating. We took ages to decide what the band would be called, to the extent that it became a joke that any random phrase anyone said might become the band name.
SD: Like 'Pure Homage'. JB: We settled on our name because it was an interesting combination of words. It wasn't your classic band name which goes 'random single syllable/plural noun' which still seems to be a thing and it's so f**king boring. I liked the fact that it was a bit nerdy and a bit self-deprecating if you know the reference. It's also a bit stand-offish, so it said what I wanted to say.

CM: Is there anything that desperate journalists write that makes you bristle?
SD: Asking us where we got our name. RH: It's not so much what they write, but they keep on f**king asking us the same f**king questions. When someone hasn't been bothered to prepare - that review in Q, Simon playing the f**king guitar. Stuff like that winds me up when someone hasn't even had a cursory glance at your Wikipedia page opening paragraph.
JB: On a wider scale, the thing that really annoys me is when journalists write 'so-and-so is saving rock & roll', 'this band is what the world needs right now', or 'this person is good, because this person is bad'. It's lazy and it doesn't have to be like that.

CM: You called yourself 'nerdy'. I've seen you call yourself that in relation to elements of the recording process for the second album.
SD: I think that's our self-deprecating way of saying that we've done something ourselves that we got a lot of enjoyment out of.

CM: Is it a bit like people who are organised or have tidy houses labelling themselves with OCD?
RH: I think it was pretty nerdy; I had a spreadsheet for every song, with every single part labelled out and every single effect.
JB: Nerdy's cool. I've always been nerdy about language.
CH: I've always been nerdy about music and equipment.
JB: I suppose if you wanted to utilise a term that doesn't have the hang-ups of 'nerdy', you could say that we're 'passionate'.
SD: I'll take that
CH: Perfectionists too.

CM: Stylistically, it's not a sea-change from album one to album two, but you've talked of "Grow Up" as a more unified piece, thematically. What about the recording of it? Am I right in saying that you've used more overdubs this time?
RH: Yeah, that's pretty much true. There are definitely more overdubs on this, deliberately so.

CM: So how do you feel about taking that slightly less 'live' sound on the road?
RH: It was a little nerve-racking at first and there a couple of songs I'm not sure we could pull off, or wouldn't sound that great, but at the heart of the songs, we're still a four-piece with one guitar part, more or less. A lot of the overdubs were decoration.

CM: In terms of the current UK gigs, people are talking of the Scala gig in London as the pinnacle in terms of scale. Is that gig the big one for you?
RH: It's the biggest gig we'll have ever headlined and it's in London, where we live, so it's a big deal for us. 'Pinnacle' is probably not quite true, because they're all as important as each other, but it's the biggest crowd and so you need to promote it the hardest to get people to come.
SD: The Scala is a bit of a benchmark gig; it's a statement to be playing there.
RH: When it was first put to us we were like, 'What the f**K are you on about?' My inclination would always to play it smaller and have venues packed out.

CM: Germany next, with more gigs there than in the UK. Why's that?
RH: They pay us more.

CM: The economic imperative!
RH: Honestly, a lot of the German tour will pay for the UK one to some extent.
CH: It's a long way to go, so you feel like once you're there you want to make the most of it. We are going to play more gigs in the UK, just not in one block now.
SD: It's good to go where the response is best and the response in Germany has been excellent.

CM: It's not the old 'women in bands' chestnut, as that's probably on the list of what makes you bristle (Jo mutters 'good'), but in a world where we can still have such sh*t about two world leaders' legs on the front page of the Daily Mail (Jo mutters 'f**king hell'), is it critical that people see strong women in bands?
JB: Definitely - 100%. I think it's incredibly important that bands with women in are seen as 'bands' and not 'female-fronted bands' as a novelty and that female drummers aren't talked of in 'imagine that' tones. I think it'd be really great if we were at a stage where bands like ours, or all-female bands were viewed as 'just f**king bands'. Unfortunately, we're not at that stage at the moment, so yeah, it is very important.

CM: What next for Desperate Journalist?
JB: Writing the next album.
CH: Playing some more gigs.
RH: We've got some more songs that didn't go on the album that we still want to put out because they're good. They just didn't go on the album because they didn't really fit. There are a couple of songs we didn't get time to finish. Hopefully we'll get a chance to do something with them. After that, we'll set about writing our next album. We've got a bunch of gig dates this year, so we haven't got a load of time.

CM: Have you got a theme yet?
JB: Maybe.

CM: Brexit and Trump?
JB: Yeah. It's just a concept album about Brexit. It's all very, very dry and about economic policy.

CM: Father John Misty got in on America, so you can do Brexit.
JB: I bloody love it, don't tempt me. 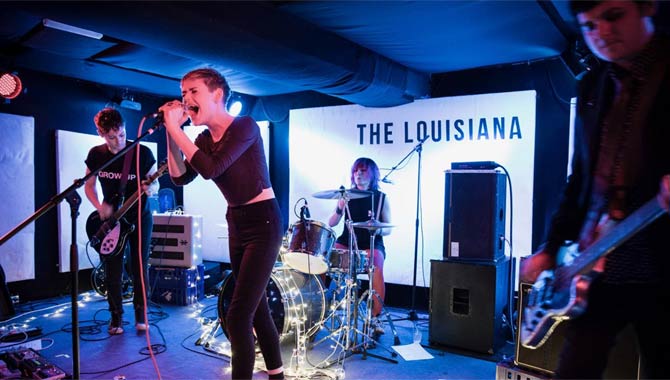 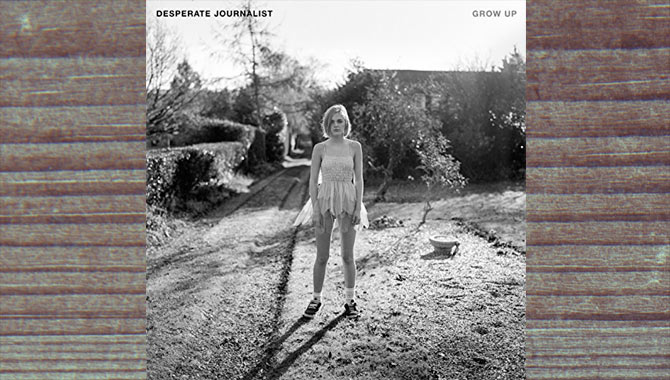 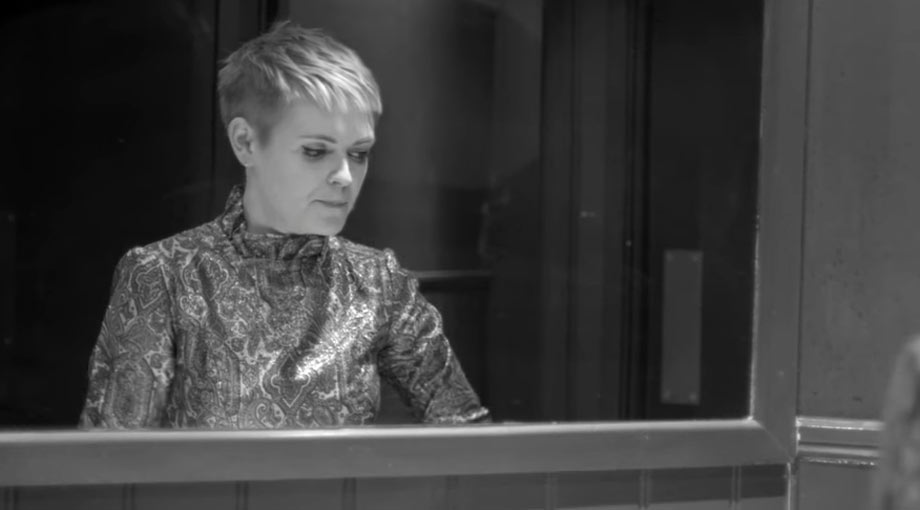