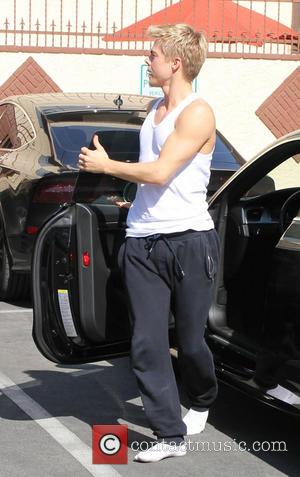 Picture: Derek Hough - Celebrities outside the rehearsal studios for 'Dancing with the Stars' in Hollywood - Hollywood, California, United States - Sunday 19th May 2013

The Dancing With the Stars regular met Cole in 2010, when he was hired to work on her video for Parachute, but he admits he had never heard any of her music.

He explains, "I honestly took the gig because it was an excuse to come back to the U.K. as I hadn't been back in so long... I vaguely knew who Cheryl Cole was - in that I knew she was very popular in the U.K. But I had never met her; the best I knew of her was from Google searches... I hadn't heard her music at that time."

They immediately hit it off and were soon snapped out together on numerous occasions, prompting speculation they were more than just friends.

Cole and Hough remained tight-lipped about the dating claims both during and after their relationship, and the dancer admits he's reluctant to reveal much about their romance even now - because he values his one-time girlfriend's friendship.

He says, "We dated for a while. Absolutely we are still friends, we are still very close... I don't speak about my time with her because I think often in this culture people take advantage of their friendships. I've never spoken about her because her friendship is important to me."

Cole, who is now dating her back-up dancer Tre Holloway, has previously praised Hough as "an amazing, amazing person" after he helped her through a near-fatal battle with malaria, which she contracted while on holiday in Tanzania.