The album is set to hit in March.

Depeche Mode are set to launch their fourteenth studio album 'Spirit' this Spring, and they've now released the full tracklist along with the lead single 'Where's The Revolution' which will be available as an instant download for all who pre-order the new album. 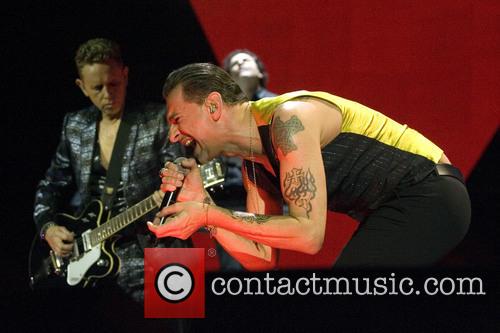 The album features the band's first new music in four years and follows their 2013 release 'Delta Machine' which reached number two in the UK. It sees them working alongside producer James Ford from Simian Mobile Disco for the first time; a man who has in the past worked with the likes of Klaxons and the Arctic Monkeys.

'We are exceptionally proud of 'Spirit', and we look forward to sharing it with everyone', said frontman Dave Gahan. 'With James Ford and the rest of the production team, we've made an album that I believe is truly powerful, both in its sound and its message.

'Where's The Revolution' is a politically charged anthem that makes for an appropriate first single given the political turmoil of the world right now, and there's something dark and macabre about the rythmic drums, the buzzing synths and Gahan's mournful vocals. Fans were memorably first given a taster of the track during a press conference in Italy last Autumn.

A 12-track release of 'Spirit' won't be the only edition to purchase in the coming weeks. The Deluxe edition will include two CDs, a book of photos and artwork by Anton Corbijn that you can only get with this set, a series of 5 remixes from Depeche Mode, Matrixxman and Kurt Uenala entitled 'Jungle Spirit Mixes'.

If that wasn't enough, Depeche Mode will be embarking on their major 'Golden Spirit' World Tour in May, with 34 shows in 21 European countries including the Netherlands, France, Greece, Russia, Spain, Italy and Germany to name a few. The tour will begin on May 5th at Friends Arena in Stockholm, Sweden, and will conclude at the Cluj Arena in Cluj-Napoca, Romania on July 23rd. They'll also perform at the London Stadium on June 3rd.

'Spirit' is set to be released on March 17th 2017 via Columbia Records.

Spirit Tracklist (STANDARD):
Going Backwards
Where's the Revolution
The Worst Crime
Scum
You Move
Cover Me
Eternal
Poison Heart
So Much Love
Poorman
No More (This is the Last Time)
Fail

Spirit Tracklist (DELUXE):
DISC 1
Going Backwards
Where's the Revolution
The Worst Crime
Scum
You Move
Cover Me
Eternal
Poison Heart
So Much Love
Poorman
No More (This is the Last Time)
Fail