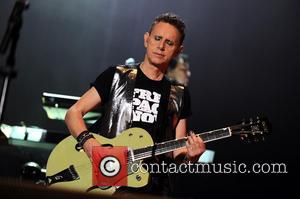 Rockers Depeche Mode have scrapped an upcoming Kiev concert following a week of violence in the Ukraine capital.

The British trio was billed to perform there later this week (26Feb14), but singer Dave Gahan and his bandmates have formally cancelled the International Exhibition Center gig due to the "civil unrest and instability in Kiev and the whole of Ukraine."

A message, posted on the band's website, reads: "The safety and security of the band, crew and fans is the highest priority, and at this time it is not possible to ensure a safe and enjoyable concert experience for everyone involved.

"The band’s thoughts are with the Ukrainians during this challenging period and they sincerely look forward to the next time they can perform for the fans in Kiev and Ukraine."

Reports suggest more than 80 protestors and police officials were killed during clashes in the days before widely unpopular Ukraine President Viktor Yanukovych was ousted after setting the military against civilians calling for his resignation.