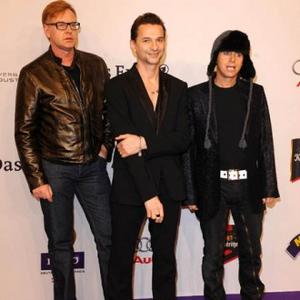 The Deftones lead singer - who is well known for his distinctive on-stage scream - revealed he first decided he wanted to be a musician when he went to see the electronic band on their 1990 'Violator' tour at the age of 17.

He said: "It was an outside amphitheatre. I made my way up to the front of the barricades, and was enthralled from that moment.

"It was one of the key things that made me want to make music."

While 37-year-old Chino first realised he wanted to be a performer at the age of 17, he admitted when he was 10 he fell in love with 'Lookout Weekend' by Debbie Deb, as he liked to breakdance at the time.

He explained: "It's this incredible electro/Hi-NRG number. I was probably about 10 years old, and breakdancing was kind of my life back then.

"That song just made me wanna dance."

Another musical hero of the 'Diamond Eyes' hitmaker - who is also the lead singer and contributing guitarist of rockers Team Sleep - is British singer and songwriter PJ Harvey.

He revealed to NME magazine: "I love her voice, her songwriting, her whole attitude whenever she goes out to make a record: she refuses to repeat herself and she's always finding bizarre ways to reinvent her art and keep moving."