This is the re-make to keep an eye out for this year.

'The Magnificent Seven' returns in, thankfully, not another sequel but a remake starring Chris Pratt and Denzel Washington. It's a semi-modern twist on a frequently revisited and retold tale that mixes Western wonder with gargantuan gun-power, and it's set to be released in theaters this Fall.

Denzel Washington and Chris Pratt star in 'The Magnificent Seven'

It's a re-boot of John Sturges' Oscar nominated 1960 classic, this time directed by Antoine Fuqua who has previously worked alongside Washington on 'Training Day' and 'The Equalizer'. And with a modern spin comes new characters, because replacing the likes of Yul Brynner and Steve McQueen is impossible, as we saw with the last two sequels of the 'original' movie (we say 'original', but the original is actually 1954 Japanese film 'Seven Samurai').

Watch the trailer for 'The Magnificent Seven' here:


It's the same premise though; a group of seven skilled gunmen unite on horseback to defend a nearby town from a tyrant, even despite the huge danger and little pay. You've got Sam Chisolm (Washington), a bounty hunter and a leader whose been offered money to defend the town of Rose Creek from the ruthless Bartholomew Bogue (Peter Sarsgaard) who has raised hell with his thievery and murder. Joining Chisolm is the explosives-loving gambler Josh Farraday (Pratt), marksman Goodnight Robicheaux (Ethan Hawke), trapper Jack Horne (Vincent D'Onofrio), South Korean assassin Billy Rocks (Lee Byung-hun), Native American warrior Red Harvest (Martin Sensmeier) and good old-fashioned outlaw Vasquez (Manuel Garcia Rulfo). Together they put their lives on the line to defend the vulnerable, engaging in violent exchanges with Bogue's men as they come and go. This isn't about money anymore; it's about honour and revenge. 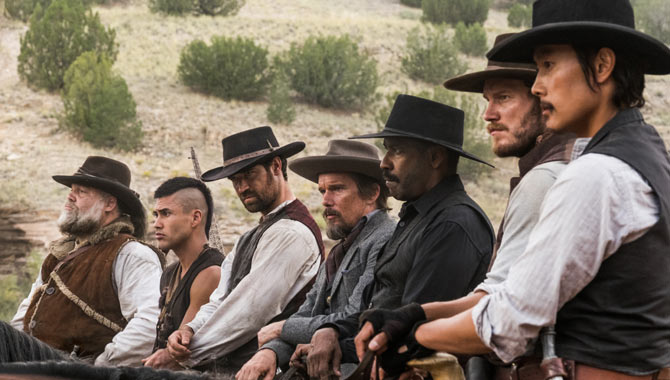 Meet the cast of Magnificent Seven

Written by John Lee Hancock ('The Blind Side'), Richard Wenk ('The Equalizer') and Nic Pizzolatto ('True Detective'), the new movie will also feature appearances from Haley Bennett as a townsperson, as well as Sean Bridgers, Vinnie Jones and Cam Gigandet.

'The Magnificent Seven' is scheduled to be released in the US on September 23rd 2016.