Dennis Quaid is set to develop a non-scripted series about his journey to adopt an abandoned kitten named Dennis Quaid.

Dennis Quaid is set to develop a non-scripted series about his journey to adopt an abandoned kitten named Dennis Quaid.

The 66-year-old actor adopted the kitten earlier this month after discovering the adorable moggy shared his exact moniker, and it has now been confirmed he will star alongside his new pet in a series titled 'Saving Dennis Quaid'.

According to Deadline, the show - which is being produced by ITV America's Leftfield Pictures - will follow the actor and his business partner Jimmy Jellinek as they set out on a mission to adopt the cat, bringing the feline from Lynchburg in Virginia to Los Angeles in California.

Dennis will also turn the story into a companion podcast mini-series, after he recently co-founded the podcast company Audio Up Media alongside Jared Gutstadt.

In a statement, he said: ''I've been lucky enough to be associated with the wonderful world of pets through my involvement in recent films. And while I've traditionally been more of a dog person, when I heard that 'Dennis Quaid the Cat' was in peril, I knew I had to act quick.

''It's been amazing to see the public's response to our little pet adoption, and during a difficult year for all of us, I'm glad it offered some levity and brightness. I'm very much looking forward to sharing kitty Quaid's story with viewers and listeners in these new projects.''

Dennis will executive produce the TV series alongside Leftfield Co-Presidents Shawn Witt and Gretchen Palek, as well as his business partners Jared Gutstadt and Jimmy Jellinek.

The 'Parent Trap' star - who is father to 28-year-old actor Jack Quaid, and 12-year-old twins Zoe and Thomas - spoke about adopting the kitten earlier this month, when he said ''couldn't resist'' adopting his namesake after discovering the feline when it was rescued by the Lynchburg Humane Society.

He said: ''It was really off the wall, but I just couldn't resist. I had to. I'm out to save all the Dennis Quaids of the world.

''Maybe they should start naming animals in shelters after different celebrities and see who bites.''

And Danielle Ulmer, Lynchburg Humane Society Adoption Centre Manager, has said she couldn't believe it when she got the phone call from Dennis and his team. 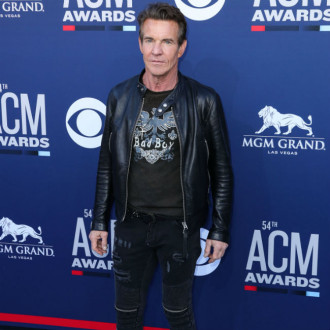