Gavin Polone condemns the actions of almost everyone in article denying animal cruelty.

Last week, a video surfaced from the set of Lasse Hallstrom's latest movie 'A Dog's Purpose' seemingly showing a dog being forced into running water against its will and subsequently going under. Some members of the cast and crew who were not present during the incident expressed anger over the clip, but producer Gavin Polone has unveiled an article explaining exactly what happened. After the clip appeared on TMZ, PETA called for a boycott of the movie. A statement from Amblin Productions saw them insist that the German Shepherd in question, named Hercules, was not harmed in the stunt and suffered no lasting trauma. However, star Josh Gad, director Lasse Hallstrom and producer Gavin Polone all commented that they were disturbed by what they saw, regardless of the story behind it.

Polone has now explained the situation fully in an article in the Hollywood Reporter, condemning the 'inexcusable' actions of the dog handler, the person who edited and kept the video for 15 months, PETA for their 'impossible agenda' and TMZ for the misleading images used in their report.

'The dog trainer should have stopped trying to get the dog to go in the water as soon as the dog seemed uncomfortable', he pointed out, before expressing his regret over using the 'ineffective' American Humane Association (AHA) to keep things under control on set. 'Its monitors have been present when bad things have happened to animals on sets, not offering enough protection to stop those events and displaying no real protest after they occurred', he said. 'I should have fought with the studio to come up with alternatives... I didn't, and there is nothing to mitigate my inaction.'

He explained that the dog was not afraid of the stunt itself, but the position in which he was being coerced from. 'In footage of the rehearsal for the scene, you can see the dog not only unafraid of the water but desperate to jump in. In fact, he had to be held back by the trainer from going in too soon', Polone insisted. 'The dog did the scene in rehearsal without problem, though it was from the left side of the pool, not the right side, which is where the dog is in the TMZ video.

'Before the first real take, the handlers were asked to change the start point of the dog from the left side, where he had rehearsed, to the right side. That, evidentially, is what caused him to be spooked.' Polone went on to explain that the take was completed on the opposite side of the water without a problem, and blasted the TMZ video for suggesting that the dog was thrown into the water which never happened.

He hit out at the person who sold the video after having been in possession of it for over a year, accusing them of doing it for 'personal profit'. 'Why did the person who edited it to seem like the two clips were connected and not let you see the dog was alright and never in mortal danger?' He continued. 'If he wanted to protect animals, wouldn't he want whoever did wrong stopped from doing the same on other productions immediately?'

More: Reactions to disturbing clip from 'A Dog's Purpose'

Polone criticized PETA for further sensationalizing the scenario. 'Not only have they been circulating the TMZ video, which portrays an inaccurate picture of what happened, but they have included a clip from our trailer where you see the dog jumping into a treacherous rushing wall of water', he said. 'But THAT ISN'T A REAL DOG, it is a computer-generated dog leaping into the water. Isn't that the definition of "fake news"? In another post, they show a German Shepherd in a dismal steel cage, which isn't our dog. Again, misleading.'

'That PETA has an impossible agenda and that someone probably tried to make money by making my film look bad, does not excuse the mistakes made 15 months ago, irrespective of the fact that the dog in question was unharmed', he added. '

Meanwhile, star Dennis Quaid has weighed in on the controversy. 'I was there. I never saw any abuse of any animal. If there had been, I would have walked', he told ET. 'I would not say, in real context, that the dog was frightened. The dog was acting like a dog who was kind of tired of taking a bath and was ready to get out.' 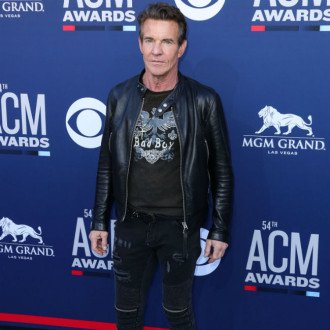