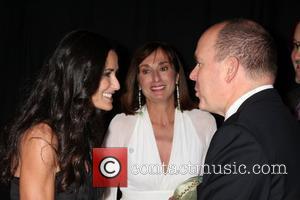 A photographer who shot Demi Moore for the December (09) cover of a fashion magazine has refused to apologise for suggesting the final image was digitally altered, despite receiving a formal request from the actress' lawyer.
Moore - who is alleged to have had multiple cosmetic surgery procedures in the past - posed for Anthony Citrano in November (09) and she graced the cover of America's W magazine this month (Dec09).
But the photo, which depicts the star looking super-slim in a revealing, skintight green dress, became the subject of controversy when Citrano claimed the picture had been heavily edited to make her hips and thighs appear smaller.
In a post on his website, Citrano wrote, "Did she have some sort of weird car accident that left a wedge of meat missing from it? The fabric even magically floats above the missing thigh."
Magazine editors denied the photo had been airbrushed and Moore posted a copy of what she claimed to be the original picture on her Twitter.com page.
Her lawyer, Marty Singer, has since written to Citrano demanding a retraction and a public apology.
In the letter, which Citrano posted online, Singer states: "As you are undoubtedly well aware, my client's appearance is of great importance to her career and livelihood, and false claims or insinuations that she secretly uses extraordinarily artificial means to alter her appearance are extremely damaging."
But Citrano is refusing to bow down to the Hollywood star's legal team, insisting he will not be bullied into saying sorry, reports the New York Post.
He says, "Neither of these (retraction and apology) will be forthcoming."