Demi Moore's daughters have been taking advice from Frances Bean Cobain on how to cope with their mother's behavior. 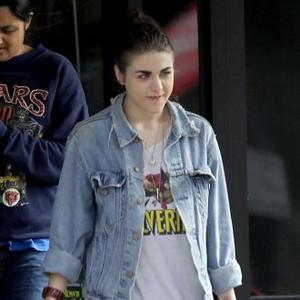 The troubled actress has had a strained relationship with her children Rumer, 23, Scout, 20, and 18-year-old Tallulah - her kids from her marriage to Bruce Willis - in recent months because of her erratic behavior since splitting from second husband Ashton Kutcher in November and so the sisters have been consulting their friend - who obtained a restraining order against her mother Courtney Love in 2009 - for help on dealing with her wild antics.

A source said: ''The girls went to the same school as Frances and have always been close.

''It seems Frances encouraged them to give Demi some tough love.''

Demi was hospitalized earlier this year and spent two months in rehab for an eating disorder and addiction issues and those close to the actress - who is currently filming 'The Good Girl' - fear she is spiraling out of control again because of the frostiness between herself and her daughters.

A source told Grazia: ''Demi has hardly been sleeping. She hardly touches any food on set and everyone's really concerned. She's at her wits' end about the girls and is very lonely.''

Another added: ''Demi has been behaving erratically, taking long breaks on set and complaining she's tired al the time.''