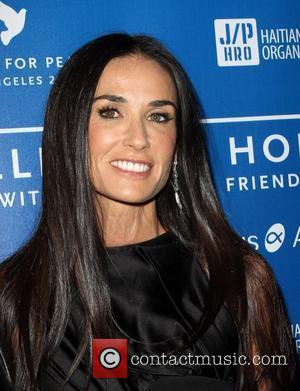 Further details of the partying that led to Demi Moore 's hospitalization on January 23, 2012 have emerged, since the Ghost actress entered the Cirque Lodge rehab centre in Utah. E! Online have released a story stating that Annie Starke - the daughter of Glenn Close - was present at the party and that her voice can be heard in the recording of the 911 call, which was subsequently released to the press.
Annie, aged 21, was reportedly in attendance at the birthday party, which Demi Moore was hosting for her friend Heather Parry. Starke had been invited by Demi's eldest daughter, Rumer Willis. Rumer and Annie have been pictured together frequently since Demi was hospitalized and on the weekend of the Screen Actors Guild Awards, they attended the afterparty together, after having dined out with Annie's parents in Los Angeles the night before. Since the incident happened, a number of media stories have surfaced claiming that Demi Moore has been socializing with her daughter Rumer, including attending Liam Hemsworth's birthday party. Today's story from E! Online (February 6, 2012) also confirms that Demi Moore had been inhaling nitrous oxide prior to experience the seizures that led to her being rushed to hospital.
Elsewhere, E! News have reported that Demi's daughter Talulah celebrated her 18th birthday in the absence of her mother, who is undergoing treatment at the Utah rehab centre.