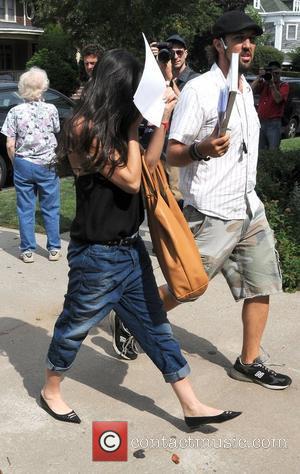 What do you do when your much younger husband cheats on you, leaves you and then starts dating Mila Kunis?

Well… duh! You go get an even younger boyfriend, of course! Preferably one that lives an enviable lifestyle as an art dealer. And that, dear readers, appears to be exactly what Demi Moore has decided to do. Not only is she apparently stringing out her divorce from Ashton Kutcher for as long as she possibly can, but she’s twisting the knife by dating someone 24 years younger than her.

Vito Schnabel, 26 and Demi Moore, 50, were spotted dancing very intimately together, back at the start of November, as Naomi Campbell’s boyfriend (Vladimir Doronin)’s party in Jodhpur, India, the New York Post have reported. Other stars at the party included Diana Ross, Bob Geldof and Kate Moss but the ones grabbing all the attention were Demi and her new young lover Vito. One fellow guest told the Post “They were dancing and grinding all over each other, openly, in front of other guests.”

Apparently, Demi and Vito have been spending a fair bit of time together, though they spent Thanksgiving apart. Vito’s no stranger to a relationship with a big age gap, either, His dad, the artist Julian Schnabel, who’s 60, just got engaged to former model May Andersen, 30.