Lovato Was Bullied Out Of School 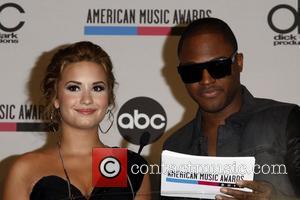 Demi Lovato was bullied so severely as a child she was forced to quit school to escape her tormentors.
The actress has spoken out about her pre-teen trauma, following in the footsteps of other bullied celebrities Solange Knowles, Minnie Driver and Jenny MCCarthy.
She says, "Bullying is something I went through when I was 12 years old. I actually ended up leaving school because of it."
And Lovato reveals she's still traumatised by the cruel treatment she was subjected to, adding, "I just remember the hard times that I went through that caused problems that I struggle with every day to this day."
"I was bottling it up 100 per cent and one day I was in a bathroom and the lights were out, I couldn't turn them on because you had to have a key in a separate part of the school.
"I just called my mom and I was crying and I said 'I don't want to go to school any more'. It was a rough time, I was by myself."
But there was a positive outcome to the hard times she suffered - she ended up learning at home with a famous friend: "I actually home schooled with Selena Gomez so she was a good friend to me then and she still is."