Could Justin Bieber Be Behind Selena Gomez & Demi Lovato's 'Feud'?

Speculation about the state of Demi Lovato's friendship with Selena Gomez has been rife since Lovato seemingly unfollowed Gomez on Twitter. Lovato also reportedly posted a picture aimed at Gomez. The pair seemed to be firm friends in January, so what could have come between them?

Are Demi Lovato and Selena Gomez feuding? They used to be the best of friends but now Lovato has unfollowed Gomez on Twitter and reportedly posted a message seemingly directed at Gomez on the social media site. The pair has been friends for more than 14 years, ever since they starred together on Barney and Friends. So what has happened in the past six months to ruin a seemingly perfect friendship? 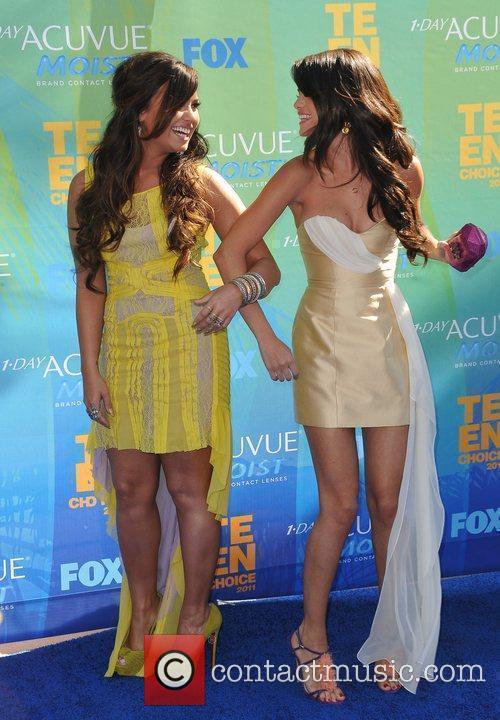 Demi Lovato and Selena Gomez photographed together at the 2011 Teen Choice Awards.

Shortly after unfollowing Gomez on Twitter on Thursday (3rd July), Lovato posted a picture of herself swimming in the sea with the caption "Swimming away from the bulls**t bye bitch." Fans and numerous media outlets have assumed the tweet is directed at Gomez as Lovato has seemingly indicated (via unfollowing) that she is no longer interested in being friends with Gomez, as E! reports.

This is certainly a change from January of this year when the pair gushed about each other in separate interviews. Although, as the Mail reports, they have both admitted their relationship was strained in the past it appeared to be all behind them at the beginning of this year. In an interview with Ryan Seacrest in January, Lovato said she and Gomez had "an incredible relationship". Whilst Gomez said, in an interview with Seventeen, Lovato was "the only person that I would tell the deepest, darkest secrets to. The only person."

So what exactly has changed since January? Gomez has certainly been having a rocky time. The actress checked into a rehab facility at the beginning of January but left after a relatively short stay. Her reason for entering the Arizona facility was not substance related which led media outlets to speculate her relationship with Justin Bieber may have been behind her need for a break. Yet, in the past month, it appears Gomez and Bieber are back together. Could this be the reason behind Gomez and Lovato's alleged feud? Perhaps Lovato is disenchanted by the prospect of picking up the pieces if Gomez and Bieber once again split.

However, there may be a more innocent reason behind the unfollowing. Singer Leann Rimes, who has had her share of Twitter arguments, claimed Lovato unfollowing Gomez may have simply been an accident. She spoke to E! and explained how easily it can be done. The 31-year-old claimed that, although "that unfollow button can actually say a whole lot," Twitter accounts accidently unfollow people. Rimes said "They [Twitter] can unfollow people randomly. Like, I've had people get mad at me like, 'You're unfollowing me?' No, I didn't unfollow you! I didn't do anything. It was Twitter's fault. So, it could be. It could be."

That could well be a possibility but it does seem somewhat unlikely as, out of the 283 people Lovato follows, Gomez would be the one 'Twitter' chose to unfollow.

Selena Gomez has had a difficult 2014 so far - rehab and rekindling romance with Justin Bieber.