Demi Lovato and Calvin Harris will perform at the MTV VMAs pre-show which will take place just before the ceremony on September 6 at Los Angeles' Staples Center. 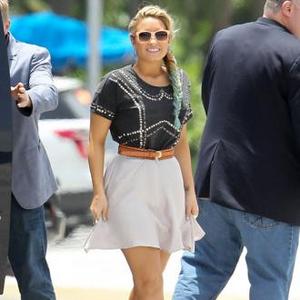 Demi Lovato and Calvin Harris will perform at the MTV VMAs pre-show.

The 'x factor' judge can't wait to sing her song 'Give Your Heart A Break' at the official warm up to the Video Music Awards which will take place just before the ceremony on September 6 at Los Angeles' Staples Center.

Demi said: ''I'm so excited to perform at the VMA preshow. I can't believe it!''

The pre-show will also feature the announcement of the winner in the Most Share-Worthy Video category which includes nominees Carly Rae Jepsen for 'Call Me Maybe' BeyoncÃ©'s 'Countdown,' Justin Bieber's 'Boyfriend', One Direction with 'What Makes You Beautiful' and Goyte for 'Somebody That I Used to Know.'

This new category features artists with music videos which made the most impact during the year.

Performers at the actual VMAs will include Alicia Keys, Pink, Green Day, Taylor Swift, One Direction, Rihanna and Frank Ocean.

Taylor is set to debut a new song from her upcoming fourth studio album 'Red' at the ceremony, where she will make the third VMA performance of her career.

Comedian Kevin Hart is hosting the event and Miley Cyrus, Wiz Khalifa, Mac Miller and the 2012 Gold Medal-winning U.S. Women's Gymnastics Team, known as the 'Fierce Five', have been confirmed as presenters.