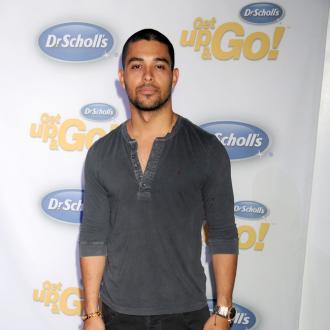 The 21-year-old singer unveiled the video for her duet with Cher Lloyd, 'Really Don't Care,' today (26.06.14), which features a number of other celebrities, including Travis Barker, Kat Graham and her on-again, off-again beau Wilmer Valderrama.

The brunette beauty can been seen cosying up to the former 'That 70s Show' star as he wraps his arms around her with a huge smile on his face in the brief scene.

The 34-year-old actor quietly rekindled his relationship with the former 'X Factor' USA judge in February 2013, but they rarely discuss their romance.

They first started dating in 2010 shortly after Demi's split from Joe Jonas. They split up after a few months but were linked again in 2011 before they split again.

Wilmer, who previously dated a string of other famous women, including Lindsay Lohan and Ashlee Simpson, sparked rumours he was planning to propose to the singer in December after he was spotted buying a diamond ring from Tiffany & Co., which he had engraved with a special message reading, ''With you and by you always.''

His appearance in the video indicates their relationship is still going strong, but Demi admitted that her new song was originally a ''breakup song.''

She told E! News: ''When I originally wrote it, it was a breakup song. But now I have sung it so many times that it kind of no longer has a significance in that sort of way. When I sing it, I always want to inspire and empower.''