Demi Lovato has had several birds in flight tattooed on her right forearm by 'LA Ink' star Kat Von D. 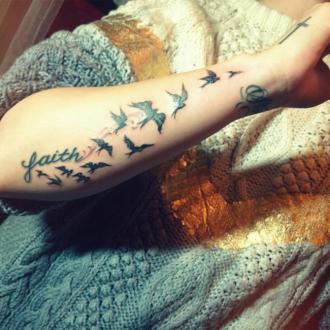 Demi Lovato has had several birds tattooed on her arm.

The 'X Factor' USA judge had the inking done by tattoo artist-and-model Kat Von D and it features a flock of birds flying up the length of her right forearm.

Unveiling the fresh design on her twitter page, Demi posted: ''Thank you so much @thekatvond for my new ink!! I think it's beautiful and I love it! (sic)''

The tattoo starts at the same point as one her previous designs, the word ''faith'' in cursive handwriting, which she got in December 2011.

The 'Skyscraper' singer has several other tattoos, including the words ''Stay'' and ''Strong'' on her wrists, a cross on her right hand and the phrase ''you make me beautiful'' emblazoned on her side.

Demi previously revealed she sees her tattoos as a connection with all her fans who supported her while she was in rehab for three months from November 2010.

The pop star - who received treatment for an eating disorder and self-harming - said: ''I got 'Stay' and 'Strong' on my wrists, and these actually were really meaningful to me. My fans constantly said it the entire time I was in treatment.''