Dem Franchize Boyz - I Think They Like Me Video 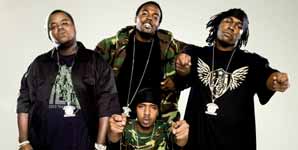 Artist: Dem Franchize Boyz
Song title: I Think They Like Me

Dem Franchize Boyz,
I Think They Like Me
March 6th 2006

Virgin Records will be releasing Dem Franchize Boyz' new single ' I Think They Like Me' on March 6th.

Dem Franchize Boyz formed in their Atlanta's Westside high school. As teens, Jizzal Man (Bernard Leverette), Parlae (Maurice Gleaton), Pimpin (Jamall Willingham), and Buddie (Gerald Tiller) put their minds and rhyme skills together and throughout high school and college they honed their vision into what it is today – a new wave of crunk that paints a graphic picture of the streets of Atlanta and their raw lifestyle.

"All our music is about some aspect of reality," Parlae explains. "Every song we write, we're talking about a specific thing. We never write just to be saying something. Every word comes directly from the heart." Dem Franchize Boyz' music has come to embody Southern Clubbing, Southern Pimping and Southern Living.

Jermaine Dupri, President of Urban Music at Virgin Records saw great potential in the group and offered them a deal, subsequently landing Dem Franchize Boyz on this summer's multi-artist compilation JERMAINE DUPRI PRESENTS… YOUNG, FLY, AND FLASHY. Already a summer smash, the record has been building over the last few months on US radio. At the time of writing the record was #1 on both the US R&B and US Urban Mainstream Radio airplay charts!

Hot off the success of "I Think They Like Me (Remix)," Dem Franchize Boyz are all set to release their new album (March 20th). Parlae, who produced two tracks on the group's debut album, is confident that Dem Franchize Boyz' skills far exceed that of an urban fashion trend. "We're what's happening," he says. "I want people to see we can stand up with anyone."

Dem Franchize Boyz, I Think They...

Dem Franchize Boyz, I Think They Like Me, Video Streams Video