Delta Goodrem has announced her break-up from Nick Jonas after nine months of dating. 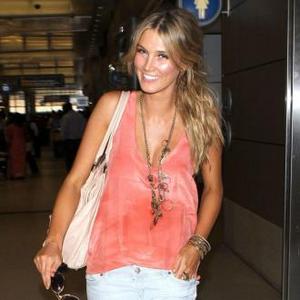 Delta Goodrem and Nick Jonas have split up.

The Australian 'Voice' judge and the Jonas Brothers singer - who began dating last May - have decided to end their relationship in order to spend time on their respective careers but say they will ''remain friends''.

A statement released through 27-year-old Delta's manager read: ''Nick and Delta have decided mutually to end their relationship. At this point in time, they are both focused on their careers as they go on different paths. They remain friends and wish each other the best for the future. There will be no further comments regarding this matter.''

Delta has recently started filming the Australian version of reality show 'The Voice' alongside Seal, Joel Madden and Keith Urban while 19-year-old Nick has taken over from Daniel Radcliffe in the Broadway production of 'How To Succeed in Business Without Really Trying'.

Delta split from fiance Brian McFadden in April 2011 after a six-and-a-half year relationship with the couple revealing they had ''grown apart''.

A statement said: ''Delta Goodrem and Brian McFadden regretfully announce that they are no longer engaged, and after much consideration, have mutually decided to end their relationship.''