Review of Hole In The Earth Single by Deftones 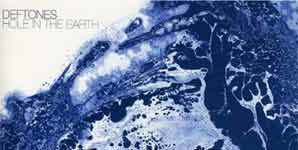 They've been around a while haven't they, Chino Moreno and the Deftones, so long in fact that it's hard to picture a time when they weren't trying to create or at worst re-invent some genre of rock or other.

Which makes it all the more galling when certain no marks accuse them of being nu-metal survivors! Survivors? Godparents more like, and even then most of the bands that trailed along merrily in their wake have since disbanded, bereft of any ideas, originality and most of all, talent.

Which brings us back to the Deftones. You see they have all of the above in abundance, and while 'Saturday Night Wrist' may not have been everyone's cup of tea, one could never accuse them of standing still and waiting to hitch a ride on the next bandwagon either.

True groundbreakers, you see, take chances, and aren't afraid to occasionally fall flat on their faces. Not that 'Hole In The Earth' does. Instead it conjures up visions of fat, semi-bald, bearded men in 2026 playing a festival commemorating the 25th anniversary of prog metal. And who would be the headliners? Well the Deftones, of course.