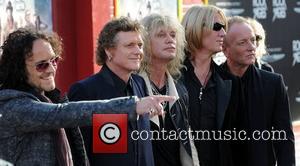 Def Leppard frontman Joe Elliott has apologised to fans for cutting short a show in New York this week (beg20Aug12), insisting he has been battling ill health during the band's U.S. tour.
The rockers left the stage early during a concert in Saratoga Springs, New York on Monday (20Aug12) and the singer has now revealed he had to give up on the show due to a nasty cough which has threatened to derail the group's tour.
In a post on their official website, he writes, "I caught a hacking cough which just ripped the hell out of my voice. Despite all the usual stuff singers do such as lemon tea, steam, etc. it just wasn't going to heal overnight, but with sufficient rest and plenty of warming up I thought I might manage to do the following show in Saratoga Springs.
"I was tough and I was ploughing through it as best I could, but by the time we got to Photograph, there was barely anything left in the tank and it was starting to hurt, so... I had to make a decision... do the encore and risk doing so much damage that we might have to cancel a bunch of shows, or blow out one song and sort out a doctor to have a look at me, which we did the following morning."
Elliott consulted a doctor and was back on stage in Maine on Wednesday (22Aug12), and he now hopes he will be able to continue the tour.
He adds, "After a couple of cortisone shots, I seem to be mending quite nicely!! The cough has gone, and the gig in Bangor, Maine on Wednesday night, albeit challenging, was a big improvement... I've had a couple of tough gigs, it's happened before and no doubt it'll happen again, but for now, I'm OK, the tour will roll on, we will all give our all, as we do every night, and we move on."