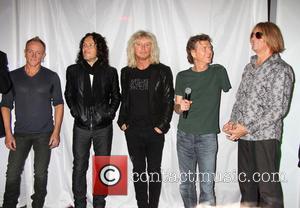 Rhiwbina under-10s coach Richard Proctor designed the artwork for three of the group's albums and when he asked the stars to help fund the team's shirts, Joe Elliott and his bandmates were only too happy to oblige.

Elliott says, "When Richard told me he needed a sponsor, I jumped at the chance... Like all things with our logo on it, I think it looks spectacular. I'm not sure it's going to guarantee a winning team every week though, but at least they will look cool."

Proctor insists his boys are "over the moon" about their new shirts.