Quote: "I attacked, almost molested, Meryl Streep at the Sag (Screen Actors Guild) Awards one year. She handled it very well. I have a picture of us hugging. She was so shocked that I completely was just crying at her feet." Actress Debra Messing recalls the last time she was starstuck upon meeting her idol, Meryl Streep.

Fact: The stars of Anjelica Huston and Debra Messing's cancelled U.S. Tv series Smash are set for a cast reunion as part of an ambitious new concert project. Hit List, the fictional Broadway musical featured in the series, will be made into a full performance, and it will feature Jeremy Jordan and Krysta Rodriguez, who starred in the show. The one-night only event will debut in December (13) in New York City.

Quote: "The few times we have gotten together in New York, it's usually just Debra and I having dinner, and we don't even make a reservation. We just kind of walk in, and there's always at least one waiter kind of dropping something, going, 'Am I on Tv? Is this real?'" Former Will And Grace actor Eric Mccormack is still good pals with on-screen best friend Debra Messing.

Quote: "I wanted to know what it was like to feel blind, so I rehearsed with my eyes closed - and fell into the orchestra pit." Actress Debra Messing on one of her first theatre roles.

Quote: "Part of me will always contend with guilt that I wasn't able to give my son the fantasy that my parents were able to give me." Actress Debra Messing will always be upset her marriage to Daniel Zelman didn't last. She filed for divorce from him last summer (12).

Fact: Actresses Debra Messing, Leslie Bibb and Taraji P. Henson have bared all for their first magazine big reveal shoots. The stars all appear naked in the new issue of style publication Allure.

Quote: "I'm allergic to beef and chicken and whitefish and mushrooms... but I'm really allergic to whitefish. If I was ever bitten by a whitefish I'd be in the hospital." Actress Debra Messing on her allergies.

Quote: "We always wanted to do a musical episode, and it never happened." Debra Messing on her major WILL & Grace regret.

Quote: "We're Jewish... He knows he's Jewish but he doesn't know that Santa doesn't come for Jewish people - so we do both." Actress Debra Messing hasn't told her four-year-old son ROMAN about the reality of Christmas yet.

Quote: "I can't tell you the last time I had a date with my husband. My ideal date with Daniel would be a spectacular meal, maybe Italian, followed by dancing. That's a New Year's resolution I'm looking forward to." Former WILL + Grace star Debra Messing looks forward to some one-on-one time with her actor husband of eight years, Daniel Zelman. The couple welcomed baby son ROMAN in 2004.

Fact: Former WILL + Grace actress Debra Messing landed her first starring role on the stage at age 11 when she was crowned Miss Pre-Teen Rhode Island.

Quote: "Normally on a movie, if we do get time to rehearse, I am surrounded by men and tend to wear jogging pants or jeans and no make-up. But every morning on The Women I would really worry about what I should wear. I really cared what those girls thought of me." Actress Eva Mendes wanted to win the approval of her THE WOMEN co-stars Annette Bening, Debra Messing, Meg Ryan and Jada Pinkett Smith with her wardrobe.

Quote: "Normally on a movie, if we do get time to rehearse, I am surrounded by men and tend to wear jogging pants or jeans and no make-up. But every morning on The Women I would really worry about what I should wear. I really cared what those girls thought of me." Actress Eva Mendes wanted to win the approval of her THE WOMEN co-stars Annette Bening, Debra Messing, Meg Ryan and Jada Pinkett Smith with her wardrobe.

Quote: "I've spent my life trying to be cool and realising that I've been a 95-year-old nerd since I was 12." Actress Debra Messing has never been hip.

Quote: "There are a hundred scripts out there and there are only two roles. One is for Cameron Diaz and one is for Julia Roberts." Will And Grace star Debra Messing explains why she's struggling to find work.

Quote: "When I was in acting school, I'd put away $10 of each paycheque toward my ring fund. I love all kinds of rings." Former WILL + GRACE star Debra Messing on her gem love.

Quote: "I'm an office-supply nerd. I hyperventilate in (US office supply store) Staples. WILL + GRACE star Debra Messing is incredibly organised in her personal life.

Quote: <p>"I want the door to my office that says GRACE ADLER on it, and I just want to, like, put it in my house like art; just lean it up against the wall." Debra Messing on what she plans to 'steal' from the WILL + GRACE set when the show ends in May (06). </p>

Fact: <p>Fashion-conscious actress Debra Messing is begging the producers of WILL + Grace to give her time off during the shooting of the final season of the show after being invited to join supermodel Heidi Klum's hit reality show PROJECT RUNWAY as an expert. </p> 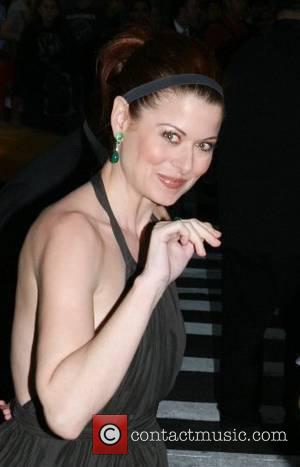