True Blood star Deborah Ann Woll is eager to start a family with her longterm boyfriend before he is completely robbed of his sight due to a rare disease.

Edward 'E.J.' Scott has been diagnosed with Choroideremia (Chm), a degenerative condition that eventually renders sufferers blind, and his current visual field has shrunk so much, he describes his vision as "like looking through a paper towel tube".

The actress, 28, reveals they have up to 10 years before he loses his sight completely and so she wants to have kids with her partner of six years sooner rather than later.

She tells Glamour magazine, "The vision loss is different for everyone. His grandfather went blind in his mid-forties. That's our basis for E.J. - about 10 years. I didn't grow up imagining my wedding day, so we may not get married, but we're committed for life, and we want kids. I could wait, but his biological clock is ticking!"

Woll insists she is well aware of the risks they face having children - the disease is linked to the X chromosome, so any daughters they have will also carry the 'faulty' gene.

She says, "If we have a boy, he won't have the disease. If we have a daughter, she will be a carrier but most likely won't have severe symptoms. If she has boys, there's a 50-50 chance they'll have it. Our children can be healthy and happy with Chm. E.J. is. Still, when I think of him not seeing our kids, as they grow..."

In the meantime, the couple has been working on ticking off everything on Scott's 'bucket list' - and raising funds for Chm research to help find a cure for the disease.

She says: "We did the Grand Canyon on the way to Chicago. We did Europe. He was an extra on True Blood this season, and the cast has been really supportive, donating things for us to auction off on eBay to raise money for research."

Scott also helped to boost medical research funds in 2012 by completing one marathon a month for the whole year. 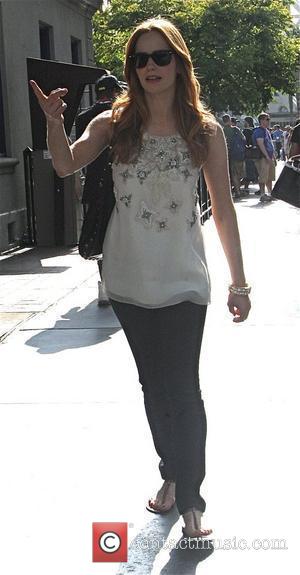