Debby Ryan and Josh Dun have been married since New Year's Eve (31.12.19), after they planned their whole wedding in 28 days. 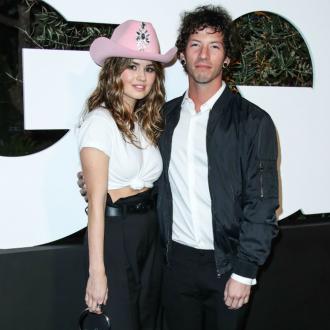 The 27-year-old actress has revealed she and the Twenty One Pilots rocker have been married for almost five months, after they decided to plan their New Year's Eve wedding just 28 days before the nuptials took place.

Confirming the news in an interview with Vogue magazine, Debby said: ''We began to flirt with the idea of having a destination party celebrating the new decade, then decided in December to get married [in Austin] on New Year's Eve, and just keep dancing until after the ball dropped.''

Debby and Josh had been engaged since December 2018, but chose to put plans in place to marry more quickly than they'd expected after an unnamed friend of Debby's passed away and changed her ''perspective'' on life.

She added: ''He was excited that Joshua and I were getting married, and I never doubted that I'd know him through every coming phase of our lives.

''When he passed, it really rocked me and put a lot of things in perspective. It didn't feel important to wait anymore, to stop being busy, or for things to line up perfectly - intending to do things is not nearly as powerful as doing, as we aren't promised tomorrow.''

The couple had their wedding at the Hotel Van Zandt in Austin, Texas, and the ceremony was the ''perfect balance'' of party and relaxed atmospheres.

Josh, 31, said: ''The ceremony was the perfect balance. I felt like it was game night at our house, and this was the ultimate game, and boy did I win! I remember every detail from how it felt to be walking down the aisle, to the full body chills I got watching Debby walk down toward me.

''The advice that I had been given by multiple people was to allow ourselves to soak it all in. My natural instinct is to be nervous and want the whole thing to be over with so we can just enjoy being married, but I decided to take the advice of my friends and enjoy every moment, even the ones where I felt out of my element and uncomfortable, as I always am whenever the attention is on me.''