South African alternative pop artist Dear Reader (aka Cherilyn MacNeil) releases her moving new single 'Down Under, Mining' taken from her apartheid inspired album 'Rivonia' due to be released on April 8th 2013 through City Slang records.

The video is a creative montage of manipulated paper puppets designed by Berlin artist Barbara Steinitz and telling the story of slavery, hard labour and devastation during the South African apartheid. It's a pretty impressive feat with intriguing detail and a well-presented melancholy about it. It's a slow, rhythmic track with dark vocal undertones and a distinct poetry about it that makes it a captivating and moving listen.

Much of the inspiration for this track comes from Cherilyn's own discoveries about her home life in Johannesburg, where, in 1963, it was the place where several members of Nelson Mandela's African National Congress were arrested only yards away from where she went to school some years later. The album name was taken from a damaged sign reading the name of the suburb in which the events took place. 'That sign, with its faded lettering, makes me think about history as a whole, and how the versions we have must all have bits that have weathered away and gone missing, and how we'll never know the whole truth about anything', Cherilyn has said. 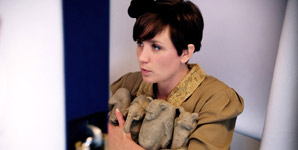