Review of Get Deap! EP by Deap Vally

Deap Vally's debut EP 'Get Deap!' is one that cements the duo's hunger and determination for widespread success. It feels like the LA duo - vocalist and guitarist Lindsey Troy and drummer Julie Edwards - have put absolutely every inch of their souls into this first release. They're ready to prove to one and all they've got what it takes to be the next girl rock duo to rampage their way to acclaim. Listening to the sheer rock 'n' roll nature that fights its way through the four tracks, you would never have thought the duo met in a crochet class of all places. However, this angsty sound can be mistaken for sounding a bit try-hard at times. 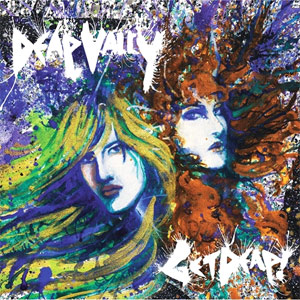 Troy's ballsy vocals sometimes get a bit tied up in her aggressive, twangy voice and it's hard to make out their meaning, but they add to the scuzz of the music. If she controlled her voice a little more - like in 'Lies' where she appears to bring down her pipes half way through - she might have a few more people relating to her lyrics. The same also goes for the beginning section of 'End of The Word' where she commands, "Listen up, there's no time like the present, I said there's no time like the present, to open up our hearts and let love shine in". The 'arghs' heard in 'Gonna Make My Own Money' are also hideously infectious. Troy's words in this track also show this bravado independence of girl power that chugs through 'Get Deap!' - "Daddy, don't you understand, I'm gonna make my own money, gonna buy my own land," Whilst the anger fits the bill of the rugged garage rock, it's a great shame it feels lyrically distant at times.

Despite the vocal rift, the guitar and Edwards' drums keep Deap Vally in the game. Brimming with weighty riffs making their mark with fragmented hooks, the duo have been compared to The White Stripes and Black Sabbath. They give the tracks a gritty presence and with the subtle feedback heard in 'Ain't Fair', they also gain a live atmosphere. With the smashing, rampant drums in tow, Deap Vally give themselves a rock-solid foundation for their music. They have everything they need, but they could tone everything down a fraction to stop it getting overpoweringly out of control. A few more lyrics with some heart wouldn't go a miss either.