Review of The Angel's Share Album by Deadbeat Darlings

There are times in an artists' career when you feel they're deliberately throwing it all away. That greatness, wisdom, unit shifting and full control of the creative process is firmly within their grasp. It's all there for the taking you feel, and then, confounding all the received wisdom, the star in question just throws it all away. Examples are almost too easy to come by, but in terms of tragedy you need not look any further than Amy Winehouse, although for sheer lysergic puckishness, the dudes in MGMT are the ultimate most recent one fingered salute to big labels getting comfortable with themselves. 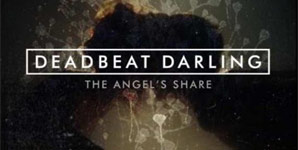 Not of course that any of those notions of self limiting career self destruction apply to Deadbeat Darling, the Brooklyn based quartet headed up ex Canvas front man Joseph King, of whom Angel's Share is their second album. Still bathing in relative obscurity, to their credit the band have at least spent the last five years doing things the old fashioned way - building up a metropolitan following since 2006 via the medium of constant live work - rather than paying their hipster mates to blog about them.

Respect is due to this post-modern work ethic then, but cynics might now suggest that patience has reached breaking point, and this sophomore outing is one that comes with a BIG SOUND. If it was a football club it would be Barcelona. If it was a hat it would be a Fedora. A film? It'd be shown in 4D. Recorded in the humble surroundings of North Wales, the Deadbeat's stadium rock aspirations run all the way through Angel's Share, right from the preening listen to me me ME opener Insomnia Salvation, with its distinctly Razorlight-esque chops and chiming surf rock overtones, to the anaemic cod-reggae of its grubby, slightly melodramatic closer Last Scene In Paris.

Perhaps some of this is due to the never knowingly undersold production team of Ken Nelson (CV includes Coldplay) and Adrian Bushby (Formerly worked with such well known shrinking violets as Foo Fighters and Muse) but although between them they keep things clean and very tidy, their base material can't really disguise a desire to be heard by the widest possible audience. They're helped by the fact that King's voice has more grit than for instance Jonny Borrell's, and the band's previously stated reggae angle is a diverting change from the vocal distortion and cheapo synth squelch of some of their contemporaries. Using this to full effect on On Peculiar Grace they at least manage to create some creaky ambience.

At times though it's hard to escape the feeling that King is simply trying too hard. Broken Down Kiss and Still Standing are both cute, but the latter has all the histrionic chutzpah of Muse, except without the usual tongue in cheek fret wankery that makes Matt Bellamy at least partially bearable. Only on Promises do they really escape the pretentious tent and hone in on Destination Pop, the vehicle a frothy slice of garage-lite that contrast with some darker words around street life's risks and addictions.

Whether this enough to inspire greatness is anyone's guess. On the one hand the ambition tells you that it might be appropriate to give away a blue plastic seat and a cup of warm, over priced lager with every copy of Angel's Share for greatest authenticity. On the other, the Deadbeat's sound no better than Boy Kill Boy covering Bob Marley after a bit of weed . Approach with caution.