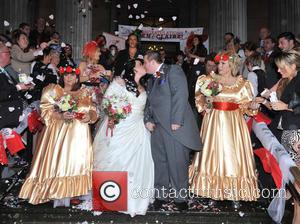 British comedienne Dawn French is moving Down Under to join the panel of an Australian Tv talent show.

The Harry Potter star will leave her native U.K. to line up alongside another Brit, former Spice Girls singer Melanie Brown, as a judge on Australia's Got Talent.

Michael Healy, head of Australia's Channel Nine network, says, "We feel honoured to welcome superstar Dawn French to join Mel B on the Australia's Got Talent judging desk. Dawn is widely recognised and adored by Australians and her contribution to the show will deliver on our promise for a bigger and better series."

French, 55, previously worked as a panellist on Andrew Lloyd Webber's U.K. reality Tv show Superstar, which documented the search for a lead actor for a production of hit musical Jesus Christ Superstar.