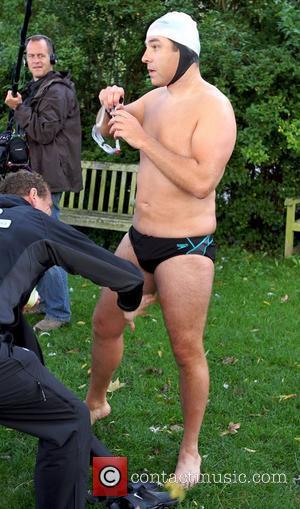 Picture: David Walliams gets greased up before his swim at the Cotswold town of Lechlade in Gloucestershire at the start of his 8 day, 140 mile...

David Walliams, the British comedian and co-creator of 'Little Britain', has dismissed reports he was tested for the potentially fatal Weil's disease following his charity swim across the length of the River Thames, reports Sky News.
Various reports had claimed Walliams was tested for the waterborne disease, often transmitted to humans when water contaminated by animal urine comes into contact with open cuts. However, a Comic Relief spokesman explained, "We understand David has contracted a bug that has caused a stomach upset. He is being treated for this and has been advised by medical professionals that it is not serious and that he will soon be back to full health. David has not been tested for Weil's disease". The popular comedian raised £1 million for Sport Relief by swimming 140 miles along the river, from Gloucestershire to the Big Ben over the course of 8 days. In 2006, he swam the English Channel - the equivalent of 700 lengths in an Olympic swimming pool - in just over 10 hours. In March 2010, he cycled across the UK, including a thousand-foot climb in the Lake Distict, and raised over £1 million for Sport Relief.
Following their Little Britain success, Walliams and Matt Lucas wrote and starred in the six-part comedy series 'Come Fly With Me' in 2010 - a spoof documentary about a British airport.