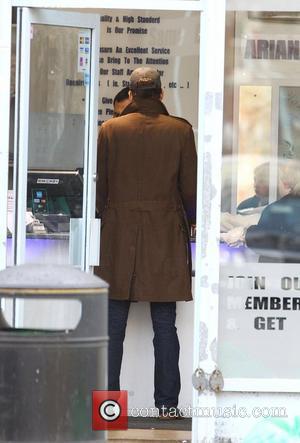 Picture: Newlywed actor David Tennant carries what appears to be a wedding dress to a dry cleaner London, England - 04.01.12

It's been a good week for David Tennant, the former star of 'Doctor Who,' after he was named the Best Actor at the inaugural BBC Audio Drama Awards - and the star was thus unsurprisingly in good spirits as he stepped out at a pub quiz alongside other such celebrities as Hugh Grant, Jonathan Ross and radio DJ SARA COX. Organised as a charity event to raise money for the charity Centrepoint - which aims to provide for young homeless people in London - the event, titled The Ultimate Pub Quiz, has reached its third year and was held at the Paramount Club in the UK capital's Soho. There, contestants duelled under the watchful eye of TV host and the night's quiz master Fern Britton, though the star names were pipped by a team from law firm Herbert Smith to the overall win of the evening.
The real victor was of course the charity however, each of the three years has averaged a total of £50,000 raised for the homeless of London and head of fundraising JOHN RAYNHAM said "It was our best Ultimate Pub Quiz yet and the first in the Centre Point Tower, it couldn't have gone much better," continuing "We can't thank the teams, celebrities and everyone who makes this event possible, enough for all they do. Like our new champions Herbert Smith, so many people come back year-on-year and that kind of support really matters."
Earlier this week Tennant took the Best Actor award for his performance in the BBC Radio 3 drama 'Kafka: The Musical' in a busy night for the 40 year-old who also hosted the ceremony at the BBC Broadcasting House in London. Other key winners included ROSIE CAVALIERO who took Best Actress and 'Rock' by TIM FOUNTAIN, which took 'Best Online Only Audio Drama.'