Twin Peaks Fans May Have A Longer Wait Than Expected For The Return Of The Cult Tv Series - Creator David Lynch Is Still Working Out Contractual Issues. 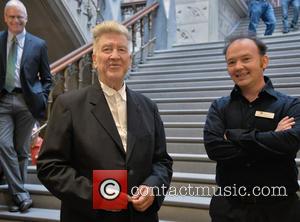 Picture: David Lynch and Bob Cozzolino - David Lynch at the Pennsylvania Academy of Fine Arts where they will be exhibiting his art work 'David Lynch:...

It was revealed last year (14) that Lynch would return to the weird world of Twin Peaks for a series on U.S. cable network Showtime, but it appears his plans have hit a snag.

In a new interview at the Between Two Worlds exhibition in Brisbane, Australia, Lynch urges fans not to get their hopes up for a quick turnaround for the show.

He says, "I haven't returned yet. And we're still working on the contract. But I love the world of Twin Peaks and I love those characters. And I think it will be very special to go back into that world."