Officials In North Bend, Washington Can't Wait To Welcome Director David Lynch And His Twin Peaks Characters Back To Town When Filming On A New Series Begins In September (15). 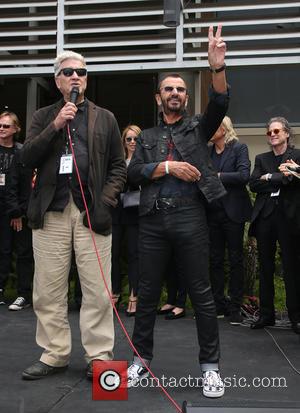 Picture: David Lynch and Ringo Starr - Birthday fan gathering for Ringo Starr's 75th and to call for peace throughout the world at On the Hollywood...

North Bend doubled as the fictional Twin Peaks in the cult 1990 TV drama and film spin-offs, and Lynch and his quirky cast have made plans to return to shoot exterior scenes for the new Showtime project, which will hit TV in America in 2017.

Londi K. Lindell, City Administrator of North Bend, tells fansite WelcometoTwinPeaks.com, "There has been a lot of discussion on social media and just around town about the return of Twin Peaks. I personally have not heard a single negative comment about the show returning. People are excited to welcome David Lynch and his team back.

"The City will be involved in working with the film crew, issuing any necessary permits for filming, such as right of way use permits, and also co-ordinating any traffic impacts from filming. The City is hopeful that Twin Peaks returning after 25 years will create a whole new set of fans who will want to visit North Bend and enjoy our beautiful natural resources and stimulate tourism and the local economy."

Lynch is planning to spend six weeks filming in the town, according to Lindell, after returning to North Bend in July (15) to scout locations.

The City Administrator adds, "He did very much enjoy a chocolate cone from Mayor Ken's Dairy Freeze. The Dairy Freeze is a local restaurant in town which is famous for its great soft serve ice cream. Mr. Lynch enjoyed it so much he came back the next day for another cone!"