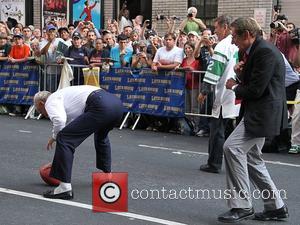 U.S. TV late-night host David Letterman was forced to apologise to his pop star guest Justin Bieber during his The Late Show on Thursday night (21Jun12) after grabbing the teenager's newly-tattooed arm, leaving him in pain.
Letterman was trying to persuade the 18 year old not to have any more skin art after spotting the word 'Believe' - the title of Bieber's new album - on the singer's left arm.
And he left the young star wincing in pain as he pretended to wipe the skin art off, stating, "How does that help how you look?"
Ignoring Bieber's pained expression, Letterman urged his guest not to turn his body into the Sistine Chapel, which artist Michelangelo covered with paintings, and then poked fun at the pop star when he responded, "I'm not going for the Sixteenth Chapel look."
A chuckling Letterman then poked fun at Bieber's education, quipping, "Canadian high school!" as his studio audience burst into laughter.
Clearly upset by the mocking, Bieber continued the interview but said, "If you want me to" when the TV host asked him if he was going to perform on the show as scheduled.
Later in the show just before Bieber was to perform, Letterman walked over to him and said, "Are you alright? Is your tattoo OK? Everybody said, 'It's a brand new tattoo and I hurt your tattoo'. I'm sorry.
"And then other people said I was snappish..."
Ever-the-professional, gracious Bieber said, "You were not snappish... You were fine."