Review of One Love Album by David Guetta 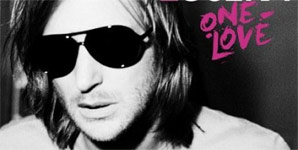 Gracenote kindly informs me that every track on this album is a Feat., apart from track 10, which is apparently a Black Eyed Peas song. I would never want to import this: it would totally ruin my cataloguing system. I don't think Mr. Guetta was particularly worried about my iTunes cataloguing when he put this album together, however. I feel sorry for his contact list.

Sure, I like clubbing: who doesn't? But the incessant foot-tapping this produces doesn't ever seem to extend past my calf, and, obviously, no ground is being broken here. That said, there's some lovely hooks on here that could possibly in the future inspire a sweat-drenched, bikini-wearing Ministry of Sound advert (seriously, where are these clubs?), but really it's just dance by numbers. There's none of the intensity you get with really really good dance music, the timeless stuff done by the great DJs.

This feels cold and calculated- a product of the times. Listen to this in a couple of years and you'll feel nothing apart from maybe a faint buzz of nostalgia, the remnants of a past hangover coming over you, the dull memory of a failed night. Because if you were to actually dance to this in a club, you would have to have been extremely, extremely drunk.