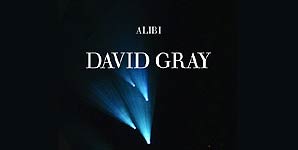 David Gray releases the beautiful 'Alibi' as a single on March 27 through Atlantic Records. A Radio 2 Record of the Week, 'Alibi' is taken from Gray's double platinum new album Life In Slow Motion, his third UK No.1 album, which was released in September 2005 to widespread critical and commercial acclaim. The accompanying video for 'Alibi' is a censored edit of the winning TCM Classic Shorts entry at last year's London Film Festival. Entitled 'Jane Lloyd' and directed by Happy, the judging panel included Dame Helen Mirren, Alan Rickman and Kate Winslet. Gray has announced a headline tour of the UK in June.

Mr Gray will play four dates, starting at Hull Arena on June 19 and finishing at London's Hyde Park on Thursday, June 22, as part of this year's Wireless Festival. Support at Hyde Park will come from KT Tunstall. These will be the first live shows for Gray in 2006 and follow his sold out ten-date UK tour in December 2005.

The video below for 'Alibi' could upset some viewers, please do not watch if you're of a nervous disposition.