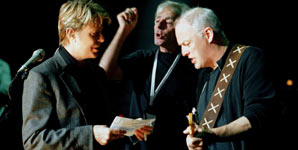 David Gilmour is releasing his recent recordings of three Syd Barrett songs, first as digital downloads on 25 December, and then as a three track EP, titled Arnold Layne, available in shops on 26 December in 7" vinyl and CD formats.

The Arnold Layne EP is a rare gem as it features two unique versions of the Syd Barrett classic as well as David Gilmour's first ever public performance of Dark Globe.

This limited edition EP will be available for 3 weeks only, following release. It marks the first time that David Gilmour has performed Dark Globe, one of the classic tracks from Barrett's first solo album, The Madcap Laughs.

David Gilmour, On An Island, Video...