Quote: "That kid did more good for people than anybody will ever know, and all of his friends know it." Liza Minnelli pays tribute to the late King of Pop Michael Jackson, who was the best man at her wedding to David Gest.

Quote: "We hang out and go to KFC - he thinks if you peel the skin off the chicken, it makes it organic. He cracks me up." David Gest on his fun outings with pal Michael Jackson.

Fact: Liza Minnelli's ex-husband David Gest showed his support for Whitney Houston at her London comeback show on Thursday night (08May08) - by sporting a black suit jacket with a glittery image of the R+B superstar emblazoned across the back.

Quote: "I'd like to lick the inside of her hair, you'd probably find KFC stuck in it." David Gest is entranced by Amy Winehouse's beehive hairdo.

Quote: "She blushed when I told her Michael had a crush on her." David Gest reveals his pal Michael Jackson fancies Beyonce Knowles.

Quote: "I love every pleasure women have to offer a red-blooded male. I love making love to women. I've always had girlfriends. I have always loved to sleep on a woman's breast. I slept on LIZA (MINNELLI's) left breast." Music producer David Gest on his love of women.

Quote: "They saw that I'm not some freak with tattooed-on eyebrows and who gets my face changed every few months. I haven't had any plastic surgery since the 1980s." David Gest on showing his true self during a stint on British reality TV show I'm a celebrity... GET ME OUT OF HERE!.

Quote: "I became Minister of Poo in the jungle. I didn't mind being in charge of cleaning out the poo every day. But I don't do dishes." David Gest on his duties in the Australian outback on British reality TV show I'm a celebrity... GET ME OUT OF HERE!

Fact: David Gest triumphed at his first gruesome challenge on reality TV show I'm a celebrity... GET ME OUT OF HERE, revelling as he was showered with spiders, shellfish and baby alligators. The estranged husband of Liza Minnelli even greeted the creepy crawlies as "old friends" as they were poured over him while he sat in a tank of water.

Fact: Liza Minnelli's estranged husband David Gest refused to bungee-jump into the Australian bush, to kickstart his appearance on British TV reality show I'm a celebrity... GET ME OUT OF HERE. While other contestants leaped from a helicopter, Gest insisted on canoeing to the location.

Fact: Liza Minnelli's ex-husband, David Gest, is off to live in the wilderness of the Australian jungle to feature in British reality television programme I'M A CELEBRITY GET ME OUT OF HERE.

Quote: "My dream is to do Shakespeare. I want to do the definitive HAMLET." Producer David Gest is considering a change in career.

Quote: <p>"I guess she can't tell that guys she loves are gay or something, I don't know. I suppose I can relate. I can't tell that the guys I'm marrying are a**holes. I guess it's not that different. But that guy was gay and an a**hole, she's got bad gaydar! I liked his arched Joan Crawford eyebrow. And the friendship with Michael Jackson. There were more than a few clues." Roseanne Barr comments on Liza Minnelli's marriage to David Gest. </p> 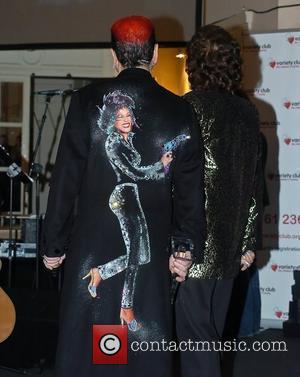