The writers of 'G.I. Joe: The Rise of Cobra' have sued Paramount, MGM and Hasbro over allegedly stealing the concept for 2013's sequel 'G.I. Joe: Retaliation'. The writers of 'G.I. Joe: The Rise of Cobra' are suing Paramount and MGM over the film's sequel.

David Elliot and Paul Lovett, two of the co-writers on the 2009 original movie, have filed a $23 million lawsuit against the film studios, as well as toy maker Hasbro and producer Lorenzo Di Bonaventura, for allegedly stealing the basis for this year's hit follow-up 'G.I. Joe: Retaliation'.

The pair claim they were solicited to present ideas for a proposed sequel just prior to the release of the 2009 action movie starring Channing Tatum and Joseph Gordon-Levitt, but after pitching an extensive number of ideas, were told they studio had opted for different writers.

However, following the film's release earlier this year, Elliot and Lovett allege they have noticed many of their concepts in the film which were used without credit or compensation.

They contend in the lawsuit, obtained by The Hollywood Reporter, that ''nearly every aspect of the Joe Retaliation Movie, from the beginning to the end'' features their work and provide side-by-side comparison of the similarities.

'G.I. Joe: Retaliation' - which starred Dwayne 'The Rock' Johnson and was directed by Jon M. Chu - has grossed more than $300 million since its release in March.

Elliot and Lovett are seeking $20 million in actual damages and $3 million in compensatory damages. 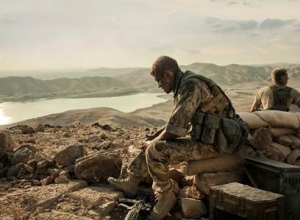 In 2006, 3 soldiers from the British Army's 3rd Battalion set out across the Kajaki...