We just can't wait until winter for 'Twice Upon A Time'.

The trailer for the forthcoming 'Doctor Who' Christmas special has arrived, and it's times like this that make us yearn for December. We already know that we'll get to meet Jodie Whittaker for the first time, but what final adventure is in store for Peter Capaldi's Doctor?

Mark Gatiss, Peter Capaldi and David Bradley star in 'Twice Upon A Time'

Continuing on from season 10 episode 12, 'The Doctor Falls', we see the Doctor on an adventure with the first ever incarnation of himself in 'Twice Upon A Time'. Obviously, William Hartnell is no longer around to be in any more series, but David Bradley has turned out to be quite a convincing replacement.

The series' first Doctor appeared in this week's finale.

Last night (July 1) saw the tenth series of 'Doctor Who' come to a close, with many expecting Peter Capaldi to bow out of the role ahead of the annual Christmas special episode set to premiere later this year. Putting his regeneration on hold however, the Doctor found himself joined by a very familiar face.

David Bradley surprised fans in the 'Doctor Who' series finale

The BBC have now confirmed that this year's Christmas special will be a multi-Doctor story, featuring the current Doctor (Capaldi) with his new friend and instantly recognisable First Doctor, David Bradley. It was something that got tongues wagging instantly on social media, with the buzz and hype surrounding the upcoming special at an all-time high.

After Mary gives birth to Jesus Christ in Bethlehem, she and her husband Joseph are immediately met with the threat of their child - the son of God - being murdered on the order of King Herod, who hears about the alleged birth of the King of the Jews. The family flee to Alexandria in Egypt for seven years, before returning to Mary's hometown of Nazareth, Israel upon hearing that Herod is dead. Jesus is still unaware of the special circumstances surrounding his birth, unaware that his true father is the Lord in Heaven, and unaware that he possesses power beyond any other man in history. Sooner or later, Mary and Joseph have to open up about the miracle of Jesus' life, but before long they face yet more danger from Herod's equally tyrannical son who is also determined to have Jesus killed.

Gary King is a 40-year-old still living in his teens and who can't wait to gather up his four friends from his teenage years to complete a pub crawl that they failed 20 years ago as kids in their hometown of Newton Haven. Unfortunately for him, his now corporate, higher-living friends are reluctant to agree though with much pressure from Gary, they eventually relent. However, things aren't exactly as they remember; the townsfolk are acting oddly and they are about to embark on a mission to rescue their childhood home from a threat of galactic proportions. But will they manage to complete their drinking quest and reach 'The World's End' pub as well as save the world from certain destruction?

After being particularly badly beaten while living on the streets, Joey Jones is determined to get his life back on track. He is ex-special forces on the run from military court so when he finds the opportunity to transform into another person, he grabs it with both hands. Working as a chef in a London restaurant, he also acts as security using his specialist skills to overpower any trouble that might come their way. When his boss offers some new kind of work, he decides that he must do everything in his power to help people whose lives have been destroyed by poverty, especially when he is informed of the brutal death of one of his closest friends. However, he is torn between his desire to help those in need, and run away and start over his own life in a new place.

David Bradley has been confirmed as the actor who’ll portray William Hartnell in An Adventure In Space And Time, a biopic specially being made to commemorate the 50th anniversary of Dr Who.

Hartnell was the first actor to bring the Doctor to live on television screens back in 1963, and the Mark Gatiss-penned biopic will focus on the creation and making of that first series of what would go on to be one of the most popular science fiction names in the world. Bradley, one of the stars of Harry Potter, was understandably thrilled to have signed on for such a role. "I'm absolutely thrilled," said the 70-year-old actor in a statement reported by Digital Spy. "Mark has written such a wonderful script not only about the birth of a cultural phenomenon, but a moment in television's history. William Hartnell was one of the finest character actors of our time and as a fan I want to make sure that I do him justice. I'm so looking forward to getting started."

Other stars who’ve been named in the project include Jessica Raine, who’ll be playing Doctor Who’s first producer Verity Lambert. Brian Cox (not the science guy) will be playing Sydney Newman, the Canadian producer who helped devise Doctor Who, and Sacha Dhawan, who directed the first ever show.

I Know You Know Review

By Rich Cline
Good
With a strongly nostalgic tone, Kerrigan gives this subtly understated thriller a provocative emotional kick. Despite a slightly contrived script, solid performances make the film both haunting and thoughtful.

In 1988 Wales, 11-year-old Jamie (Fuller) loves hanging out with his dad Charlie (Carlyle). After the summer holiday, Jamie starts in a new school with a new bully (Flynn). But he's becoming increasingly aware that his dad has a double life that involves shady friends (Bradley), guns and an arch-nemesis posing as a satellite-TV company. Is Charlie a hitman or a super spy? And will they be moving to a luxurious life in America as promised? Or is something else going on here that Jamie's only beginning to understand? 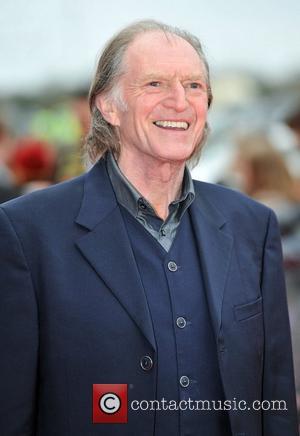