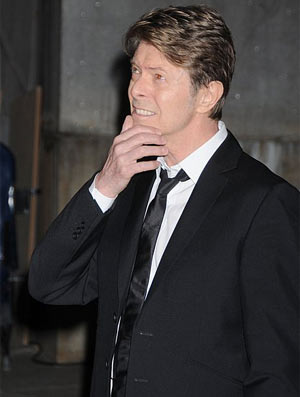 A major exhibition of vintage posters and memorabilia from David Bowie's golden years (1969-1981), including on display for the first time in 30 years the original Heddon Street K. West sign that originally appeared on front cover of Bowie's groundbreaking 1972 album The Rise and Fall of Ziggy Stardust and the Spiders From Mars.

40 years ago this year saw the release of an album and the meteoric rise of a performer who was to overturn the landscape of pop culture more thoroughly than any artist since the Beatles. David Bowie and 'The Rise and Fall of Ziggy Stardust and the Spiders from Mars' landed like a bolt of lightning on the increasingly grim landscape of 70s Britain.

As the centerpiece of the exhibition, the gallery is proud to unveil publically for the first time in 30 years the original Heddon Street K. West sign from the album's front cover - probably the single most iconic cover location in British rock history, along with the Abbey Road zebra crossing. Rescued by a music industry veteran and finally restored, this is the original sign face seen on the album cover's famous Brian Ward photograph, with Bowie standing underneath, a pose recreated in the original location by countless fans.

From Ziggy up to the beginning of the 80s, Bowie embarked on an unprecedented, rollercoaster of creative renewal and reinvention. From London, to Los Angeles and Berlin, each musical chapter was accompanied by a startling visual transformation, a personification of the musical and cultural ideas firing Bowie's restless creative changes expressed through his record sleeves and posters.

As with his astute selection of musical collaborators, Bowie also had a knack of working with highly talented design collaborators; the exhibition highlights the world famous images created for Bowie, by Brian Duffy, Edward Bell, Masayoshi Sukita, Guy Peellaert, Steve Shapiro, and Eric Stephen Jacobs. In common with a surprising number of major artists from the 70s, original posters and promo material on Bowie are hard to come by, and the exhibition offers a rare opportunity to purchase classic vintage posters, and more, from his greatest period.