Review of The Next Day Album by David Bowie

Though the common-held perception of David Bowie is one of a true pioneering visionary, an artist that started trends and styles, the truth is a little more calculated. What made Bowie great in the 70's and 80's was his perception and awareness; he was an artist who cottoned on to movements and genres just as they were about to blossom, assimilating their characteristics together in order to create something new from something existing. As Tyrannosaurus Rex became T-Rex and released their self-titled LP in 1970, it was Bowie who took that glam rock and distorted it with a progressive rock narrative to become Ziggy Stardust. As the names Can, Neu!, Kraftwerk started seeping into the British music press, so it was Bowie who went to Berlin to embrace their influence; he even took Iggy Pop, whose Stooges foresaw punk by nearly a decade, along for the ride. 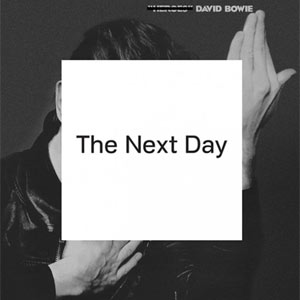 The funny thing is this is the norm for artists in the 21st century; there's a whole book about it - Simon Reynolds' Retromania - that summarises new musical progression as musicians reaching back to the past to fit disparate old components together, something backed up by every comparison made to another artist in a music review. Bowie's skill in doing this was quite a singular one at his peak, and it's why his classic records have remained so retrospectively popular. By absorbing so much of each era he passed through, his music became the definitive sound of them, pulling together all strands from glam, to punk, disco, krautrock, to create this tapestry that all different musical tribes could stake a claim to as theirs. But back then there was always something new to latch onto; in 2013, if you take Retromania's argument as truth, the only movements Bowie could take from would be something already looking into the past - which has never been the The Thin White Duke's style. So when it comes to The Next Day, his first album in a decade, he's taken influence from someone who he's rarely tipped his cap to before - himself.

The most obviously self-referencing song on here you already know: 'Where Are We Now?' name drops heavily on Bowie's time in Berlin, with the narrator apparently coming to terms, aptly enough, with how his past has shaped his present. However, there are little codes and reminders all over the place. 'You Feel So Lonely You Could Die' - which, along with closing track 'Heat,' are the closest sonic cousins 'Where Are We Now?' has in their melancholic reflective state - cheekily slips in the drum beat to '5 More Years' in its coda. Elsewhere you have fourth track 'Love Is Lost,' a clear ancestor to Bowie's Berlin period, with its unsettling organ strains and electronic pulses cutting through an otherwise forthright rock chug, pulling it down to somewhere bleaker, darker. The Berlin trilogy is often heralded as his greatest work, and it's clear that the period in the late 70's that saw Low, "Heroes" and Lodger's release remains ingrained within their creator. Though nothing here goes anywhere near as weird as 'Warzawa' or 'Neukoln,' the eerie tension that held those three records together is returned to again and again, even if - on the likes of 'Valentine's Day,' it barely nudges it off course.

Interestingly enough, much of the material contained within The Next Day feels like a follow-on from Bowie's last albums in the late 90's and early 00's. That period has been largely brushed over by critics, but things like his work with Nine Inch Nails' Trent Reznor were actually fascinating in their collision of art pop and industrial brute; shorn of the weight of Bowie's more celebrated back catalogue, tracks like 'Fall Dog Bombs The Moon' from 2002's Heathen held up in their own right. Fast forward to The Next Day and it's clear that, on songs like 'If You Can See,' which marries a wild pace with an urgency unseen on the rest of the LP, and 'Dancing Out In Space' (because he had to have at least one song title that referenced the cosmos), that Bowie's placed far more worth in that period than many of his fans did.

What's impressive on The Next Day is that, far from certain peers, who rock with the sense of a bunch of old men dearly wishing they were still back in the 70's, this album is relatively rocking without ever giving off that same feel of longing for a younger day. There's reflection here undoubtedly and, as mentioned, a whole heap of self-referencing; but the feel is of an artist writing from the perspective of the here and now, coming to terms with that and moving on. Even the overly schmaltzy riff on '(You Will) Set The World On Fire' gets away with it, perhaps because, in typical Bowie fashion, his lyrics are more projections onto a narrative which means that even at this stage we're still never fully sure if we're truly getting inside his soul. Going back to 'Where Are We Now?' it's why that song is so impactful, and was the perfect choice to announce his return: it was a rare moment when it felt that all the characters and the plot lines fell away to reveal just David Jones.

The weakest track on The Next Day is 'The Stars (Are Out Tonight)' by some distance, and it's largely because, despite it being another up-tempo number, it's where Bowie sounds a little frail and, well, flat. His lyrics are clunky, his voice is ragged and it goes beyond showing a man acting his age to a man struggling to keep up with it. It never feels like that anywhere else; Bowie still sounds formidable, even in his 60's a towering presence. Assessing how The Next Day sits alongside anything else he's done is irrelevant; an artist who has gone through as many character changes, taken on as many styles and moved through as many eras as he has defies such lazy list making. What can be said is that it is, at this point in time, at this point in his life and career, probably as good a record that David Bowie could've possibly come up with.