Review of Station To Station Album by David Bowie

What is most shocking about Station To Station - besides perhaps the sheer quality of the songs, which are amongst the best David Bowie has written - is how cohesive it sounds. Despite (as he now admits) effectively recording it from underneath a mountain of cocaine, despite having spent the previous decade continually changing both persona and genre, and despite working hard to ensure that it sounded little like the records that preceded it, Bowie managed to create a unified piece of pop art, a single-minded exploration of a particular sound. 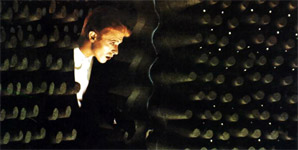 The sound Bowie developed here could loosely be called 'kraut-soul'. The artificial, aloof form of soul which he explored on Young Americans is transplanted onto the song structures and aesthetic of the experimental rock sound known as Krautrock. Bowie adopted Krautrock's cold, robotic sounds, its rhythmic drive, and its commitment to what another devotee, The Fall's Mark E Smith, would later call 'The three R's: repetition, repetition, repetition'. Nowhere is this more apparent that on the album's title track and finest moment, a glorious eleven minute appropriation of that is best about the likes of Kraftwerk and Neu. It marches ominously forward, slowly and steadily, pushed along by insistent drumming and draped in dark guitar, before unexpectedly shifting form entirely and turning into what sounds like disco music as re-imagined by Ralf H_tter. 'It's not the side effects of the cocaine/I'm thinking that it must be love', Bowie unconvincingly protests, accompanied by a rattling keyboard riff. It's one of the best songs he has recorded.

The remainder of the album is almost as good. Indeed, this is one of Station Station's most important strengths: whereas other Bowie albums sometimes stumble between incredible peaks and eminently ignorable troughs, here he is close to his best throughout. The disaffected funk of 'Golden Years' and the tense, keyboard driven, soul song 'Stay' are successes; glam pop masterclass TVC15 is even better, as is the album's closer, a bleak cover of 'Wild Is The Wind'. The latter could perhaps be seen a companion piece to the similarly-titled 'Word On A Wing': both songs are maudlin ballads elevated by passionate, desperate vocal performances from Bowie.

As a stand-alone album, 'Station To Station' is essential. These reissues - a Special Edition spread over three cds, and a far larger Deluxe Edition - come with a number of added extras, all of which are interesting but less essential. Both reissues feature a remastered version of the album created from the original analogue tapes; the differences between the two masters of the album are, however, extremely subtle, and anyone who is not an audiophile will find little to excite them. The reissues also include a recording of a 1976 concert at Nassau Coliseum, which finds Bowie and his band on good form as they embellish and play with the Station To Station tracks and older songs like Panic In Detroit. Also included on the Deluxe Edition reissue are vinyl versions of the album and live show, a DVD which contains, amongst other things, a new 5.1 surround sound mix, a disc of shortened and single versions of the album's tracks (which with the exception of the poppier, more direct TVC15, do not benefit from these straitjackets), and a wealth of Bowie paraphernalia ('Six-panel folded Steve Shapiro photo poster of Bowie kneeling', anyone?). The Deluxe Edition is worth considering if you are a Bowie obsessive with a lot of spare cash; otherwise, the Special Edition is a better entry point to one of the finest albums in the back catalogue of a very talented pop musician.