Three years ago the world was unexpectedly gifted the self-reflective and nostalgic first single of David Bowie's 24th studio album The Next Day, a wonderful track titled Where Are We Now? The album, love it or hate it, seemed to represent the greater rock 'n' roll elements that Bowie had defined himself with in the early 1970's. Tracks such as The Stars (Are Out Tonight) and Valentine's Day could have slotted with ease onto Ziggy Stardust And The Spiders From Mars. However, many people found it to be a final swan song because of its retrospective nature, a farewell to one of musics most adventurous and influential artists. 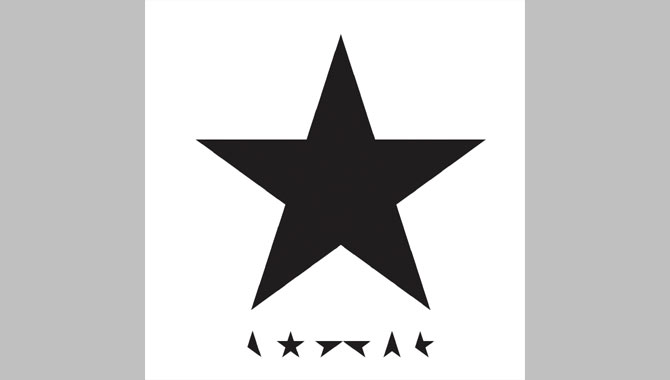 Enter Blackstar. David Bowie's 25th studio album and with it some of his most experimental, and with that, best music since the fascinating Outside released over 20 years ago or his iconic Berlin era releases in the late 1970's (Low, Heroes and Lodger). Blackstar arrives as a demonstration of the absolute artistic freedom Bowie possesses and what a staggering gift it is to behold. In terms of structure within Bowie's expansive discography, Blackstar holds closest kin with 1977's Station to Station. However, Blackstar possesses its own darkness, its own grooves, it's the return of the indescribable David Bowie that has established him as an icon and musical legend.

This album is probably the most that Bowie has strayed away from pop music, even within his most creative albums there were singles accessible for airtime such as Sound and Vision, Ashes to Ashes or Heroes. Here however, the title track, Blackstar, was the first single released for the album where we are submerged within a sprawling and swirling ten minute track comprised of a floating sax, irregular drum patterns, Gregorian chanting, ominous electronica and some of Bowie's most sinister vocal work and fractured lyrics. What makes this song so bafflingly excellent is that Blackstar is a great indicator of what the album contains, while simultaneously sounding like nothing else on the seven-track LP.

The closest that Blackstar comes to releasing a conventional single is Lazarus, which is also the only song on Blackstar which features in Bowie's off-Broadway musical of the same name. It's a brooding track, death-obsessed and filled with dread. It's got a wonderful build and the only track with a hook, and later reveals a classic Bowie-esque moment where he calls out "Oh I'll be free/Just like that bluebird." Other than that, tracks such as 'Tis a Pity She Was A Whore and Sue (Or a Season of Crime) we find relentless saxophones blaring and fiddling with melody to the point of obscurity accompanied by breakbeat percussion which has only been seen in David Bowie's career within the questionable Earthling. Here it works to fantastic effect, there's an oppressive nature to the musical arrangements which add the texture of violence that Bowie sings about on both songs. On Girl Loves Me, we find Bowie playing with Nadsat once more (the language penned by Anthony Burgess in A Clockwork Orange) with devilish delight. It's to no surprise it reveals some of his most snarling and insidious sentiments. At points throughout Blackstar, he is almost hissing at you with a grin.

Blackstar is so much more potent than his 2013 release The Next Day, it's rumbling and ominous, focussed and relentless. Bowie has experimented with jazz in the past as demonstrated throughout Aladdin Sane, Jump They Say and throughout the Berlin Trilogy, which is no surprise considering saxophone was the first instrument he learnt to play as a child. That in mind, he has never released a jazz album before, and this is the closest we have ever been to that. The choice to collaborate with Donny McCaslin and his jazz quartet works phenomenally, although it must be said that this isn't a jazz album nor is it art rock, funk or electronica. It harnesses all these attributes and venomously spits out something that is essentially an intriguing band record. It showcases a talented group of musicians comfortable in their ability to navigate through its harmonically twisting tracks.

The lasting effect that this album has over the listener is one of spellbinding ambiguity. It's a rich, deep and odd album that feels like Bowie fighting to move forward with relentless focus - which is exactly the position in which he has made some of his greatest music. Blackstar is a sheer and visceral delight, an absolute triumph. Once again, we find ourselves now looking onto his acolytes to try and catch up with him once more.