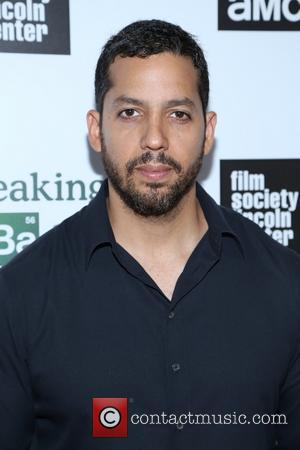 Celebrity illusionist David Blaine had rapper Kanye West, Woody Harrelson and Will Smith and his family recoiling in horror during a U.S. Tv special after putting an ice pick through his hand without drawing blood.

The magician took his show to celebrities' homes and performed mind-bending tricks right in front of them, and one particular stunt had West, Harrelson, the Smiths and Breaking Bad stars Bryan Cranston and Aaron Paul speechless.

At the start of the David Blaine: Real or Magic show, which aired on Tuesday night (19Nov13), the illusionist had West and Harrelson's stomachs churning as he slowly stuck a sharp pick through his hand, with the end of the blade poking out through the other side - much to his celebrity fans' shock. He then asked West to pull out the ice pick and examine his uninjured hand for himself, as Harrelson looked on.

Blaine repeated the same stunt with Will and Jada Pinkett Smith as their children, Willow and Jaden, watched intently, while he did it again with Cranston and Paul - and they were all left stunned.

Later in the programme, Blaine showed the trick to a doctor, who expressed his amazement at the illusion and joked that there was a "simple explanation" to the cause: "He has no blood running through his veins!"

However, Blaine admitted that not every ice pick trick has gone to plan after working on the stunt for 10 years.

He confessed, "I brushed a nerve the other day and my hand was like, frozen for three days."

During the Tv special, Blaine also had germaphobe director Woody Allen averting his eyes as he downed a glass of water and swallowed two goldfish - only to bring them back up hours later, alive and well.

He also surprised Katy Perry by producing a small alligator out of her empty purse, and played card tricks on Harrison Ford, pop star Psy, actress Olivia Wilde and her fiance Jason Sudekis, among others.