Blaine Is A First-time Father 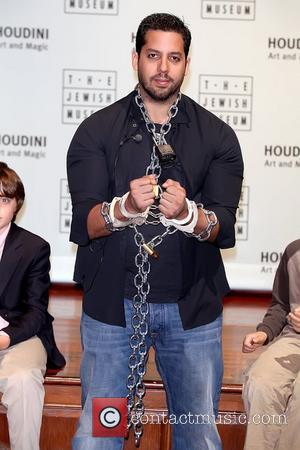 Picture: David Blaine reveals the secrets of Harry Houdini's escapes to children at the opening of 'Houdini: Art and Magic exhibition' at The Jewish Museum...

Celebrity illusionist David Blaine has become a first-time father after a nervous dash to hospital in the snow when his fiancee went into labour during a blizzard.
The magician's partner, French model Alizee Guinochet, began experiencing contractions last Wednesday night (26Jan11) just as heavy snow fell on their home in New York City.
The couple headed out into the street in an attempt to hail a cab, but after failing to find a taxi, Blaine flagged down a passing snowplough and asked the driver to take them to a hospital.
A source tells New York Post gossip column Page Six, "The doorman and people on the street tried to help him flag down a taxi. But there were absolutely no cars on the road."
A representative for the couple has confirmed they were taken to a nearby medical centre on a snow plough and revealed Guinochet gave birth to a healthy baby girl by the end of the night.
The tot's name has yet to be announced but the rep says, "Mom and baby are doing fine."