David Beckham had a nice relaxing day with his daughter, Harper, in London after a rather heated argument with a member of the opposition while playing for Paris Saint German last night in France.

The 37-year-old footballer, model and all-round British icon strolled around Kensington with his daughter while sporting a pair of trendy brown desert boots, jeans and his now customary flat cap. All the walking became a bit too strenuous for Harper, and daddy Beckham had to pick her up to alleviate her wee legs. Becks was likely relaxing after what turned out to be a rather tempestuous first start for his new club PSG. St Etienne’s workhorse Brazilian forward, Brandao, and Goldenballs got into a bit of a scuffle after he stepped on compatriot and Beckham’s team mate, Thiago Silva’s shin. Good ol’ D-Beck stepped right in to defend the centre back, before they had to be separated. Beckham signed for the newly minted PSG in the Janurary transfer window, and warmed everyone’s hearts by announcing his salary at the club, which, considering the hefty funds at their disposal will be very high, is to be donated to a children’s charity rather than Beckham’s presumably already swelling account. 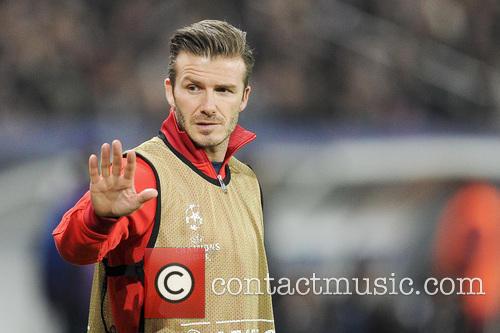 Some naysayers, cynics even, purported that this was nothing more than a ruse, designed to alieveite the pressure on PSG as they enter into a period of financial fair play, enforced by UEFA. Some, just think Beckham is a really nice guy. We know what we think.