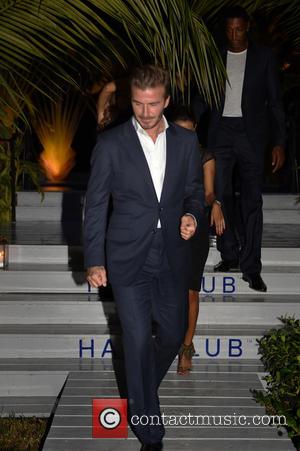 Picture: David Beckham - The event series which began in the heart of London last March at the Wellington Arch will move to Shanghai in 2016....

The former soccer star and the actor were among the cast for the film, which was shot in Mexico City, Mexico.

As the film went live online on Monday night (21Sep15), Beckham said, "I was very nervous at first... I was waiting in my trailer on the first day when I got a bunch of lilies with a note from Harvey saying, 'It takes a man to give another man flowers'."

Beckham plays a motorcycle daredevil, who finds himself mixed up with a crowd of circus performers and has to rescue the troupe's leading lady. Keitel plays the circus ringmaster.

The writer/director tells WWD.com, "I saw David like Clint Eastwood, a man of few words but many squints. And he’s a good face to watch."

Beckham is committed to his new acting career after appearing in back-to-back Guy Ritchie movies The Man From U.N.C.L.E. and the upcoming Knights of the Roundtable: King Arthur.