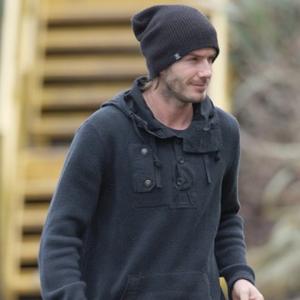 The designer's soccer star husband attended the launch of her latest collection for the first time - bringing along their seven-month-old daughter, Harper - as part of the city's current fashion week.

Victoria also unveiled a tribute to Harper in the form of a handbag as part of the show, which David watched from a seat at The Front next to Anna Wintour.

Victoria told Graziadaily.co.uk: "Oh, she is such a daddy's girl. Harper comes to work with me. Last season she was here when we launched Victoria, Victoria Beckham.

"But this is David's first show. I think he has only just realised how hard I work. That it's not just a hobby."

Victoria's collection included feminine, fitted shapes, finished with military detail and biker boots, which were partly influenced by her husband.

She added: "It's all about construction and quality. The hardware and military influence is coming from the handbags. I am so excited about the new Harper bag. I am designing what I want myself. And I can't wait to wear it.

"My daily life is my inspiration. I took the beanie hats from David's wardrobe and there are some boyfriend jackets that are all him. And the baseball stripes and jersey cuffs came about when I was standing in kitchen and [my son] Romeo runs in wearing a baseball kit and I thought that's it. It looks so cool."

Victoria also said she had to leave some of the gowns out of her show and revealed she is having to turn down some stars' requests to wear her creations on the red carpet, as she hasn't a big enough team yet to start offering such a service.

She added: "I have a lot of gowns in the collection but edited them out for the catwalk show.

"I've been lucky to have had lots of people ask me to make them things for the red carpet but I am having to say no. We are too small a team to be able to do that yet. I can't afford to show them on the red carpet before I show them to the buyers."